Guerrilla marketing is about using low-cost, unconventional marketing tactics to create a unique, memorable and shareable impact on an audience, and has been described as a campaign that “interrupts, intercepts, or intrudes on a target audience at a time and place at which they may not expect it”

What is ‘guerrilla marketing’?

A concept popularised by American business writer Jay Conrad Levinson, guerrilla marketing is an advertisement strategy that aims to utilise small budgets in unconventional ways to maximise public impact. While most marketing has taken place in traditional media (newsprint, television, radio etc), guerrilla marketing takes to the streets, shopping centers and other public spaces to reach the largest possible audience.

Think of  the giant gorilla footsteps carved into the sand at an LA beach, followed by a crushed Jeep next to one of the footprints, to promote King Kong 3D (that’s true gorilla marketing)… 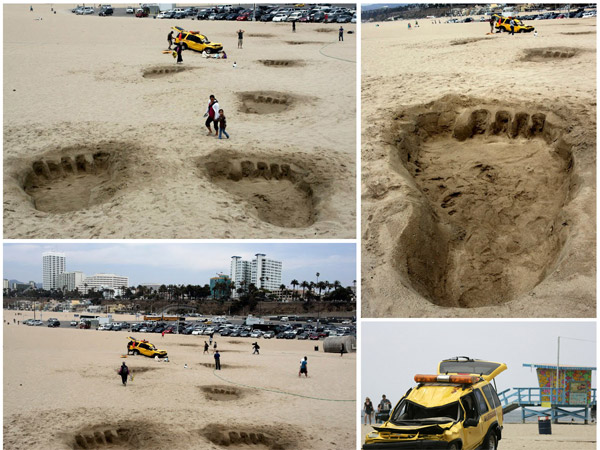 … or Unicef’s Dirty Water Vending Machine, which placed vending machines full of ‘disease-infected’ water bottles all over Manhattan to promote awareness and raise money for charity: 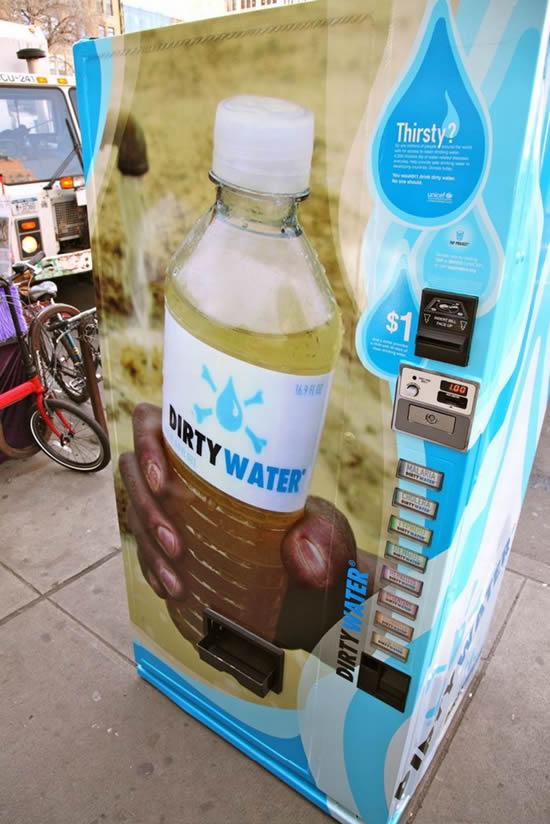 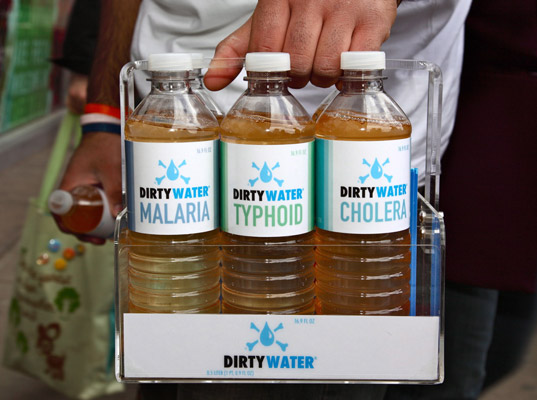 Guerrilla marketing is not a new concept

The term was coined in 1983, with the publiction of Jay Conrad Levin’s book Guerrilla Marketing: Secrets for Making Big Profits from Your Small Business, a guide to using lively, low-cost marketing promotion methods, which became a bestseller and has been updated and republished many times since.

The concept? Use creative, unconventional, often edgy, tactics to advertise on a relatively small budget, with a focus on grasping the attention of individuals at a more personal and memorable level.

Some other well-known examples include T-Mobile’s flashmob campaigns, which harness the element of surprise by organising people to burst into ‘spontaneous’, perfectly-co-ordinated song and dance in busy public places and allow unsuspecting bystanding to join in with the action:

Another example is WestJet’s Christmas Miracle campaign, in which the Canadian airline asked passengers in the waiting lounge what they’d like for Christmas via a virtual Santa, then presented their wishes gift-wrapped to delighted passengers mid-flight with dedicated WestJet elves. This reportedly led to a 77% rise in bookings and an 86% increase in revenue compared to the previous year.

Guerrilla campaigns are often associated with real-world public displays, but in 1999, when internet marketing campaigns were in their infancy, film school students Daniel Myrick and Eduardo Sánchez successfully pulled off what many consider the first online guerrilla campaign, to publicise The Blair Witch Project – a movie about film students investing tales of a mysterious, supernatural woods-based killer and meeting a sticky end.

The inventive campaign blurred the boundaries between fiction and reality by creating an urban legend-style buzz that the film, which was shot on shaky, low-quality, hand-held video, was a real footage, perpetuated by a website devoted to the ‘actual’ Blair Witch. Some even suggest that the film-makers drip fed information into threads on internet forums dedicated to the ‘legend’ of the Blair Witch.

Millions flocked to the box office to see for themselves what all the fuss was about, and what began as a project with no stars, no script, and a budget of around $50,000 grossed $250 million worldwide. 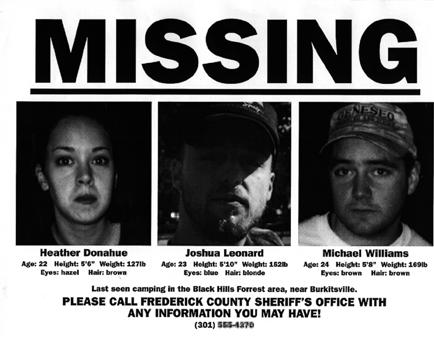 Do guerrilla marketing campaigns only work for B2C though?

So far, we’ve seen that guerrilla campaigns are about marketers pushing these boundaries with ideas that go beyond traditional techniques and, as such, are often seen as suitable for B2C brands (as in the examples above), but not B2B. After all, aren’t business people too serious-minded and doesn’t ‘unconventional’ translate as ‘unprofessional’?

I can see why B2B marketers would approach guerrilla with trepidation, if only for fear of getting push-back or, worse, outrage, from the boss. But I think they’re missing a trick. B2B audiences are still people (hence the emergence of the term H2H – human-to-human marketing), who want to be inspired or to feel an emotional response to a piece of content.

Businesspeople are also consumers. Why shouldn’t creating memorable experiences be just as effective in the B2B sphere?

Just because someone is a business buyer doesn’t mean they don’t read Heat, use Motley Fool or visit a David Lloyd leisure club. Everyone is getting more and more resistant to traditional media-based messages and we need to work harder to get into their world. Any company that hasn’t woken up to this fact is going to find it hard to survive

Here are some examples of those that grabbed attention and generated tangible leads:

Salesforce is one of the biggest CRM (customer relationship marketing) solutions on the market, but when it launched its cloud-based service back in 2000, it was a small fish in a big pond. So it decided to take the market by storm with its mock ‘End of Software’ demo, which declared that enterprise software was a thing of the past, while internet services would shape the future.

Audaciously, it took place in front of Siebel Systems’ user conference, with ‘protestors’ carrying large signs with anti-software messages and chanting anti-software slogans to the conference attendees as they walked past the protest.

It generated a lot of exposure in business and trade press, and allowed the company to build its brand in a crowded market to reach companies looking for an inexpensive, easy-to-use and reliable sales automation solution.

Zoho, another CRM provider, used Dreamforce 2013, one of the biggest cloud computing events of the year, to access the thousands of delegates (and potential clients) it attracted. And they didn’t let the little fact that it was run by arch-rival, Salesforce, stand in their way. Their strategy on the day included: 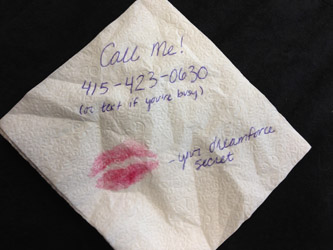 Zoho raised brand awareness which its cheeky tactics and says it ‘helped’ Salesforce by enhancing the experience of the Dreamforce delegates – even claiming they saw Salesforce employees taking advantages of the perks.

US IT security company Aladdin (now part of SafeNet) leveraged the reputation of another brand, the Hummer utility truck, to help generate leads among  a selection of their target market: bankers and financial professionals.

They sent each of them a remote control toy Hummer, couriered to each office in a package in clear packaging so that they could see that there was an actual toy Hummer inside. They also included a card explaining the connection between the product and the toy Hummer – strong, dependable, sturdy.

However, the package contained no remote control.

The recipients were asked to meet a member of Aladdin’s business development team, who would hand it over. 35% of recipients agreed to a meeting, and the total cost for each lead was less than $ 20 per meeting (including messenger cost). 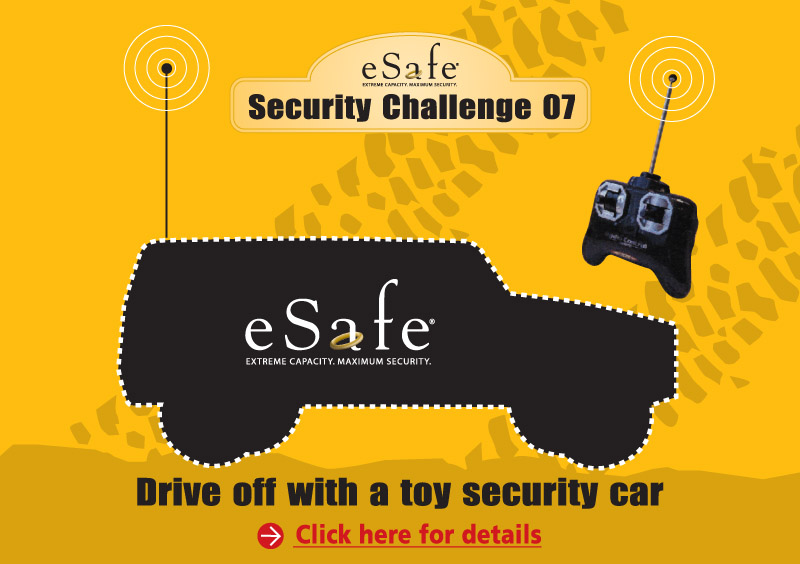 When the Sci-Fi Channel’s head of press Dan Winter was tasks with increasingly advertising revenue, he knew a chief constraint could be the limited scope of the channel’s demographic. So he and his team went out into media buyers’ offices and re-enacted scenes from films we were showing on the channel, such as Lord of the Rings and Star Wars.

He says: “It was participatory and fun, and most importantly it began to reverse the perception of our channel among an important business audience.”

In 2013, printer of luxury business cards, Moo.com, bridged the gap between the online and the physical worlds by opening up a pop-up shop in the Boxpark mall of London’s Shoreditch. A pop-up shop is “the temporary use of a physical space to create a long term, lasting impression with potential customers”.

Moo.com innovative pop-up included interactive installations which replicated the website offline (complete with drop down menus and left to right scrolling), and used near field communication technology (NFC) and QR codes so that visitors could bookmark things to come back to later. The company also used its short-term project as a platform for talks about business strategies (which were streamed online) and design workshops.

Moo’s Director of Marketing, Paul Lewis, said at the time: “It gives us a new channel to talk to people. If it works, we would consider rolling it out to another area. For now it’s a great way to talk to our customers in a different way. We love that one to one with people.” 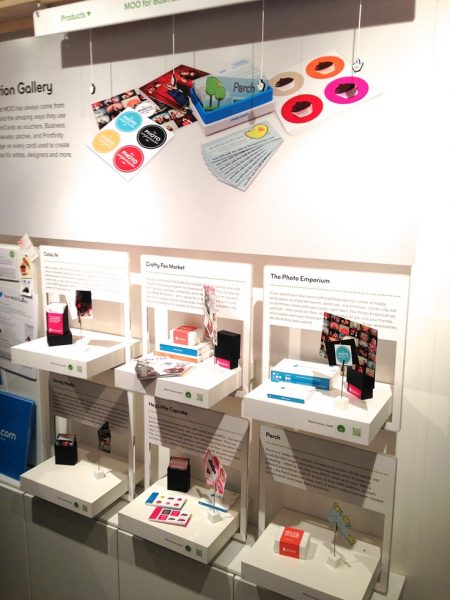 404 error pages are shown to telling a user that they’ve clicked on a broken link. Ideally, you site and all of its links will work perfectly and no one will ever have to see one. But rather than opting for a standard 404 page, some companies have used their inevitable existence to their advantage to actually enhance user experience and even make them more interactive and shareable – a concept with another example of unconventional, creative thinking. 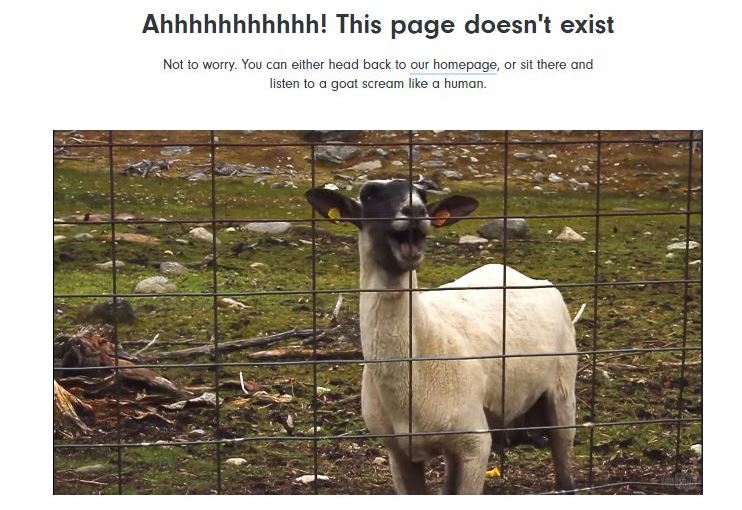 What are the business benefits of guerrilla marketing?

By their nature, guerrilla marketing campaigns carry an element of risk. So here are some rules to remember:

It’s important here as with any type of marketing activity – if not more. While an element of surprise is a crucial factor in guerrilla’s effectiveness, don’t use shock tactics just for the sake of it, or your brand may be remembered for all the wrong reasons.

Yes, a guerrilla strategy requires thinking outside of the box, but your message must be easily understood and it must fit in with and support the broader brand message. Ensure it integrates with other marketing activities or you run the risk of sending out mixed-messages.

Don’t get too carried away

Guerrilla marketing is not a licence for all-out anarchy. Careful planning is essential, and keep in mind that the campaign also needs to convey the business benefits and values of your product or service. Accept a degree of lack of control – but check any legal and health and safety restrictions and think through any possible repercussions or backlash.

Ben Snedeker, of automation software provider Infusionsoft, sums it up well when he says:

Business is about risk. It’s risk that makes an investment lucrative. It’s the same principle for guerrilla marketing. It’s the risk—the audacity—that makes these kinds of tactics so appealing to the crowds. It’s what makes people turn their heads and take notice. You make the call

Need help with your search marketing campaigns? Why not get in touch? Or subscribe to our newsletter for industry leading insights.

Businesses can now use personalised CRO to understand user behaviour, improve website performance and maximise the value of traffic. So…

Paid search has always championed targeting and relevancy as core components of its offering. After all, targeting keywords based on…

There are tons of mistakes we make as content marketers – albeit with the best of intentions. This is something…

There have never been more opportunities to connect with your audience in a meaningful and memorable way: personalisation has come…

I was scrolling through some of the news sources I read regularly when the ads provoked a question: what did…

Like remembering multiple passwords, and having to deal with awkward colleagues, jargon is an irritating but necessary reality of business life…

As we’re sure you have heard, two of the most significant developments in the last 18 months have been the…

Creating meaningful, authentic, lasting connections is one of the main objectives of digital marketing, where the focus is on offering high…