If ever there were realities that could do with a little augmentation, ours would surely be among them, so let’s take a look at where the technology stands at present

I’ve written about AR and search a couple of times according to a quick ‘site:’ search – which surprises me, as I’m a pretty big believer in its potential. The first article was written during the first flush of Niantic’s 2016 breakout Pokémon Go! success – where I used one of my favourite scifi tropes to predict the use of AR in local search (anyone that caught the new ‘Picard’ series on Amazon Prime will have seen the potential irritation that this approach could cause).

While it’s been a long four years, we’re still some way from augmented reality making inroads in to local advertising – though I still think it’s inevitable, especially as they’ve implemented one of the more obvious features (AR directions), and 3D Swirl ads are now available globally.

The second was little more than a brief write up as part of 2019s I/O review and, specifically Aparna Chennapragda’s presentation. This one contains little more than a passing reference to their somewhat super-villain-ish desire to ‘index the real world’ and the AR shark on the stage. 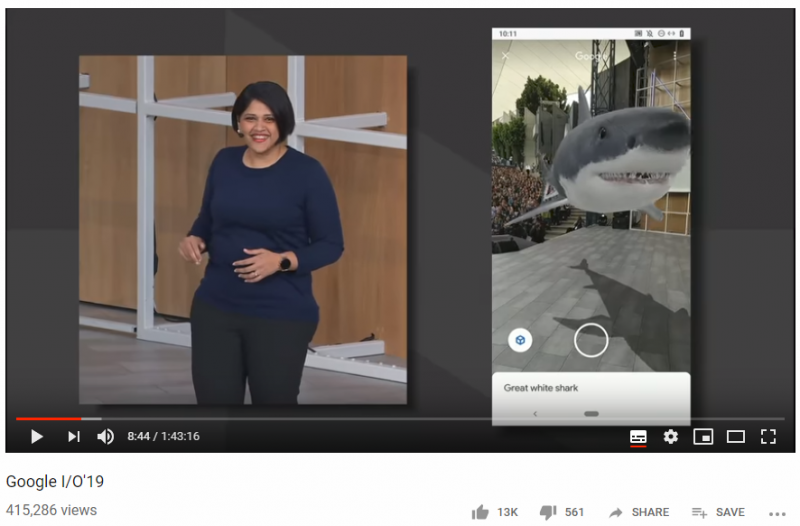 What with the apocalypse and the various other disasters in the hellscape mockumentary that is recent history, however, I’ve not really thought much about AR until today’s news roundup from Search Engine Land. The article (which offers a few highlight statistics from a brand that added AR to specific products in their range) is almost certainly there predominately for the link back to these products, but it did bring AR to mind, so I thought I’d catch up with what’s going on.

AR, which stands for ‘augmented reality’ is a practice which uses a filter (whether that’s your mobile phone screen or a wearable of some kind) to place a digital representation of a product, or other three dimensional image, seemingly into your local environment. In the instance mentioned above, a consumer can inspect a product from all angles and also observe the look of the item in the real world.

What are AR search results?

Simply put, AR search results are a seldom seen variety of SERP content which allows brands with access to Google’s early adopter program to display 3D assets in a SERP.

Google gives the following information on their program enrolment page:

If people tap the View in 3D chip, it takes them into an immersive experience where they can interact with your 3D asset or even place it in their space with AR. From this viewer experience, they can either tap a chip to continue to your website or exit to the Google Search results page.

Where are we now?

Everything and nothing has changed since 2016 – Pokémon Go! is still making Niantic money, though other AR games have failed to achieve the same cultural pervasiveness, the AR projects that have been undertaken by brands have, for the most part, failed to elevate themselves above gimmicks, while the ‘by permission’ aspect of the AR SERP result has meant that most will not have seen one in the wild.

That being said, the technology is still very much in its infancy – with most examples (like the above from Google) reliant on 3D renderings with little or no texture. However, as capture processes mature and as the Google project opens up – as it’s likely to in the next couple of years (especially as the ad version is already available) – we’re likely to see real utility in making such 3D and AR files available to consumers.

In a ‘future of search’ talk I gave for marketing managers from a number of automotive brands a few years back, I mentioned that I’d expect this technology to finally bridge the gap between ecommerce and high-value purchases, and I still think that’s likely to be the case. While it’s a nice tough to offer consumers the chance to inspect a product up close – as with the example in the Search Engine Land piece – I think this really comes into its own when it’s available to those looking at buying new and used cars, or as part of a check-out process for interior design, remodelling and kitchen refits.

As things stand, however, the options are limited to inventory ads through Google Ads and to products on your own site. 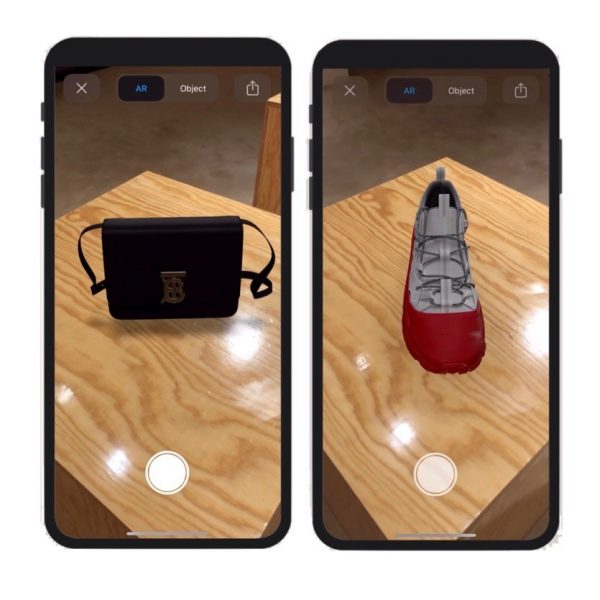 What can you do now?

As stated above, there are limited options available for 3D and AR to boost your brand, but that is by no means an excuse not to get involved. While there is obviously a cost/benefit calculation that needs to be made, for high end products for which their ability to fit in to a room or with an outfit are a possible deal breaker, ecommerce has previously been at a disadvantage – but with glTF or USDZ file types being accessible on mobile, there is no reason that you can’t overcome such a problem.

Whether you adopt a 3D rendering approach or the added expense of 3D photography of a product, there are options available and ways to push out these new file formats to consumers for whom this option may well be the difference between an eCommerce purchase and an in-store purchase (and with an ongoing global pandemic, even if you have physical locations, you’re not guaranteed to be able to offer that).

I feel like I say this a lot about the technology that is often touted as revolutionary – though as this is my first post for a while, I’m going to allow myself a reprise – the technology driving AR, VR, IoT, voice and wearables is as the 1980s car-phone to the modern smartphone. It’s a phenomenal step forward, but it’s a first step. As someone who learned the lesson early – believing computer graphics had peaked at the launch of Dune for the Amiga – I think I can say with at least some experience (earned through humiliation), that we would have to work hard to imagine how much these things will advance in the next decade.

Is AR really ready to make a major impact? Absolutely not. Should that stop you from experimenting with the format? Again, absolutely not. The campaigns you run now and the experience you gain from playing with this new toy in its infancy will put you streets ahead of the competition when it becomes a going concern. Just as with the shift to mobile, mixed media and mixed reality search – using multiple senses and inputs is going to be a big leap for brands that don’t take these small steps forward now as they become available.

Click Consult has watched trends come and go over the last 20 years and have been right at least as often as we’ve been wrong – and that’s no small victory. If you’d like to keep up to date with the industry as it changes, why not subscribe to our newsletter – or contact us to see how we can help you succeed in search.

Following on from our recent Organic Team of the Year award win at The Drum Search Awards, we’ve received more…

Google Analytics is a fantastic tool that can transform all your lovely data into insights about who visits your website,…

Paid Search is one of the most important parts of the digital mix, yet also one of the most difficult to master – for that reason, our PPC Uncovered series is a must have for marketers.