If you’ve been a victim of the dwindling organic reach that has become a major issue for marketers on Facebook (us included), then the Audience Optimisation Tool which it launched this week should pique your interest

The feature allows you to select a number of categories based on audience interests for each message that you post. The idea is that by specifically targeting each post, it will show up in a wider number of relevant newsfeeds.

However, as the tool is so new, there are no reports or stats of how effective it is yet. It’s also unclear whether your posts will be presented to users who have not yet ‘Liked’ your page.

According to Facebook, Audience Optimisation is automatically turned on for pages that have 5,000 or more likes. You’ll find the option under Settings, as demonstrated below: 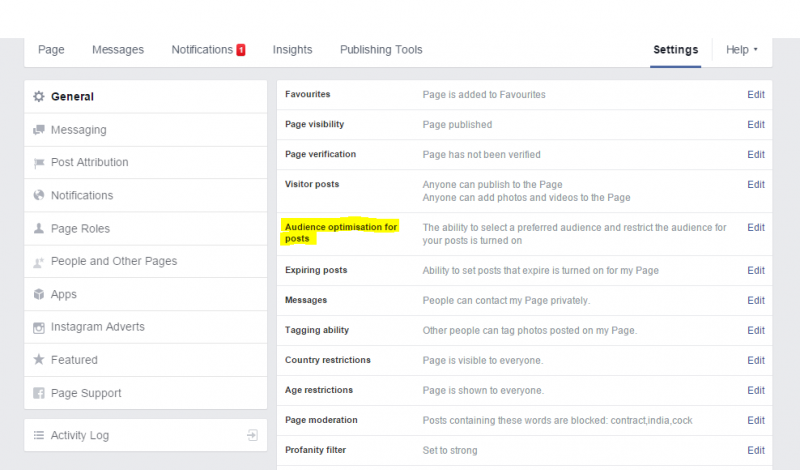 So how do you use it?

Simply create your post as usual, then select the little crosshairs symbol underneath: 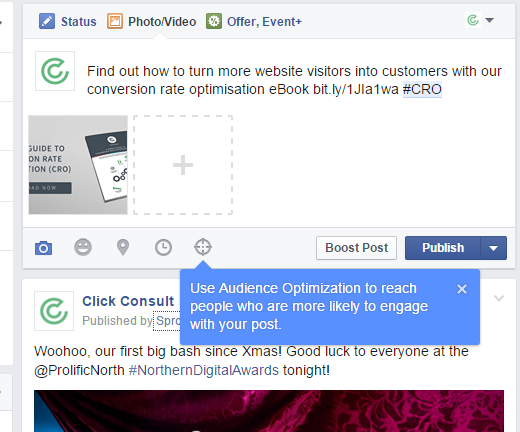 You’re then taken to the options below, which includes the pre-existing Audience Restrictions option, but now you have a Preferred Audience menu. Here, you can either search for keywords you feel are relevant (it doesn’t like acronyms though – when I tried ‘CRO’, I was presented with the suggestions ‘crocodiles’ and ‘Bing Crosby’), or use the dropdown menu, as below: 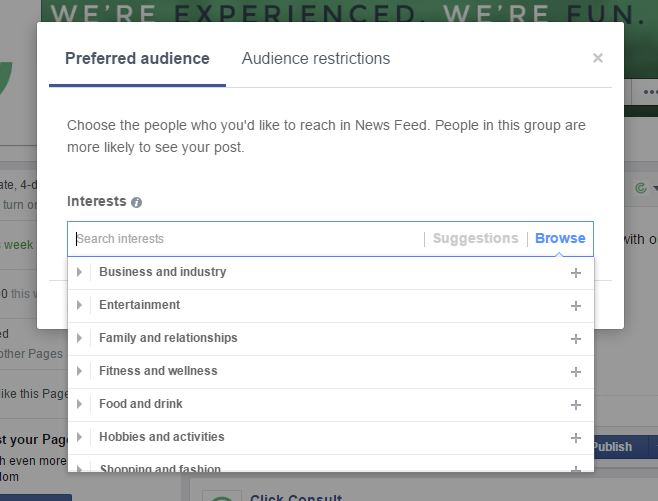 Clicking on the ‘+’ symbol alongside each heading will show you the number of users who have expressed an interest in that category. For example, apparently 1,074,032,680 Facebook users are interested in ‘Business and industry’ – although it’s not clear exactly how these figures have been calculated.

Once you’ve chosen your first category Facebook will also serve up some suggestions, but you are free to continue selecting or searching for more categories, up to a maximum if 16.

Describing some of the current restrictions of the tool, ClickZ‘s Matt Owen says: “The feature is not yet available inside Facebook Business Manager, or for posts that are created using the Power Editor. I’m going to assume that there are two reasons for this. Firstly, posts created in Power Editor have CTAs built in, and are generally designed to drive traffic directly to a site.

“By limiting this, Facebook is clearly encouraging you to create posts that work within Facebook’s walled garden. Essentially, use this if you want reach and engagement, but not if you’re looking for traffic. Secondly… Facebook may just be tired of no one knowing how to use Power Editor properly, and have decided not to swim against the tide.”

In further news, Facebook has been encouraging page admins to add one of its new CTA buttons, which allow a page’s fans to book tickets, call a business, contact a business, send a message, use an app, shop, sign up, or watch a video.

Now this feature has been developed a step further, as Facebook now tracks how many people are actually clicking on these buttons, and shows you the stats on the Insights section of your Page, listed as Actions on Page, as identified by TNW‘s Matt Navarra:

Facebook has added a new section on Insights for Page Admins – ‘Actions on Page’ pic.twitter.com/RzBjhHyxAU

If you’re using either of these new tools, we’d be really interested to hear what impact they’re had on your Facebook reach and/or engagement levels – please let us know in the comments box below.

This month, we chat to Earned Media Exec Sophie about outreach, zombies and #BiscuitFridays… Briefly describe what your job involves My…

She’s been there, done that and got the t-shirt

Social sharing is one of the most powerful ways of increasing the reach of your content. Here’s Part 2 in…

The first of a two-part series to help you turn up the volume on your social marketing.

Recent changes to the social media platform have drawn its users’ ire, but are they the latest in a line…

This easy to comprehend infographic outlines the process involved in producing a programmatic campaign, boiling down a broad and complicated…

All the need to know basics about the main, named Google algorithm changes relevant to digital marketing now distilled into…