Contact Us
HomeBlogSEOA Look at Some of Google’s Disclosed Documents

A Look at Some of Google’s Disclosed Documents

It will have escaped no one’s attention that the heads of Amazon, Facebook and Google were called upon to testify before congress, but how many of us watched it? Or read the documents? Fear not! We did (some of it) for you

There was, quite honestly, little of note during the hearing – especially from a search perspective. However, you can read Pichai’s statement here, but it says little more than most Google promotional videos.

The better questions – on the Genius scandal, use of DoubleClick data and the impact the major tech companies have had on journalism, were met with platitudes, politics and promises to ‘get back to’ the member asking the questions.

You can find the Google documents here. There are 69 pages – and, as Rand Fishkin pointed out – as far as antitrust issues go, there’s a lot of ‘saying the quiet part out loud’. There is no doubt that Google seems to be throwing its considerable weight around in ways that would disadvantage competition.

A thread of anti-competitive, unequal-treatment, and sometimes shockingly brazen use of their monopoly powers /1

The problem with this is – there are few things in there that aren’t driven by capitalism red in tooth and claw. Consistently, they leverage their growing position to achieve better results for the shareholders, to buy possible competitors and more.

Sadly, this happens in every business negotiation and, until the model that we run economies by changes, tactics like trying to force Dell to adopt Chrome as the default web browser will persist from one business to another. Is it moral? No. Is it anti-trust? Possibly. Is it likely to stop or is it a problem of Google alone? Absolutely not – and every tech giant that has gotten large enough to do these things has done them (cf Microsoft).

While much of the documentation deals with emails chains on the plans to grow Google and Alphabet as a business, there are some gems in there that should make the search and digital marketing sector sit up and take notice.

The following shows how seriously Google takes structured data and how convinced they are that it is a major part of the future of search: 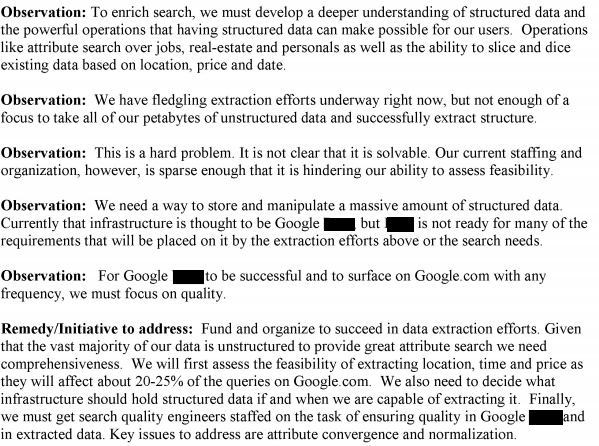 One of the common themes of rich results has been the move to the ‘answer engine’ – this is borne out by the documentation:

The following was shared with the intent of proving the use of clicks as a ranking signal; however, it’s unclear that that is what’s meant by the text. While I agree that click data and user interaction with the SERP is used as a ranking factor, I unfortunately can’t see the text as a victory.

While I don’t think taking Google at their word is the best idea, the statement is in future tense and makes the outcome of continued investment opaque. On this topic, I’m assuming the SEO community is arguing semantics with an unwilling partner – we haven’t been able to ask the right question yet and Google is refusing to help.

Beside the ‘clicks’ comment, the bullets about rankboost, and continued work on personalisation and universal search are also interesting. 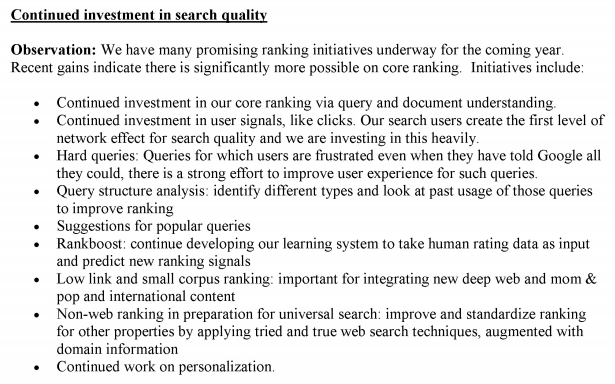 There’s a lot more in there, and Fishkin’s thread above has some interesting insights, but beyond a boost to those of us who have been pushing for more importance to be placed on the semantic web and some other half-proof on the way things are progressing at Google, the disclosed documents seem to be from too long ago to give us anything concretely new.

Keep up to date with the latest industry news and opinion by subscribing to our newsletter – or see what we can do for your brand by contacting us today!

The latest search and digital marketing news brought to you by Click Consult… Friday, 28th August The average GMB profile…

One of the UK’s largest independent care providers, Agincare, has selected award-winning search marketing agency Click Consult, to manage their…

In the month where social media continued to become the focal point for worldwide news regarding COVID-19, surprising presidential rumours…

If ever there were realities that could do with a little augmentation, ours would surely be among them, so let’s…

Following on from our recent Organic Team of the Year award win at The Drum Search Awards, we’ve received more…

Google Analytics is a fantastic tool that can transform all your lovely data into insights about who visits your website,…

Paid Search is one of the most important parts of the digital mix, yet also one of the most difficult to master – for that reason, our PPC Uncovered series is a must have for marketers.

It’s September. Already. September. Here’s some search news… Monday 14/09/2020 How to featured snippet First of a couple of stories…

While structured data implementation is still far from universal, we are noticing that more brands are managing the bare minimum…