Contact Us
HomeBlogContent MarketingHow Your Audience Will Believe Anything: The Psychology Behind the Fake News – Bas van den Beld’s Benchmark 2018 talk review

How Your Audience Will Believe Anything: The Psychology Behind the Fake News – Bas van den Beld’s Benchmark 2018 talk review

“All content is biased. It all has a background and purpose for existing” – that’s how State of Digital’s Founder Bas van den Beld began his 2018 Benchmark talk, before guiding us through some questions, assertions and anecdotes in the quest for truth in content marketing

Why are we surprised that our adult lives are filled with fake news and fake content?

We’ve always been ‘fooled’ and been willing to be fooled.

Our parents have always told us that lying is wrong, but raise us with little ‘white’ lies that influence our lives from the start, from Santa Claus to fairy tales, then to movies and magic tricks.

He even points out the fairy tale Cinderella is not only a white lie itself, but the story itself is based on lies: “Cinderella is all about fake content! The fake dress, the fake carriage, it was all fake!”

Are we even capable of living in a world without fake content?

In the past couple of years we’ve seen a lot of talk about Fake News. With the US President Donald Trump as the centre point of much of the debate around us, it seemed like it was something completely new to us.

If you look at Google Trends for the search term ‘fake news’ that might actually seem true. At the same time you can see that terms like ‘conspiracy theory’ have been around as well, but haven’t seen the spike. And if you look at the term ‘hoax’, it turns out “fake news” might not be as new as we thought. Just the term has become more broadly used. 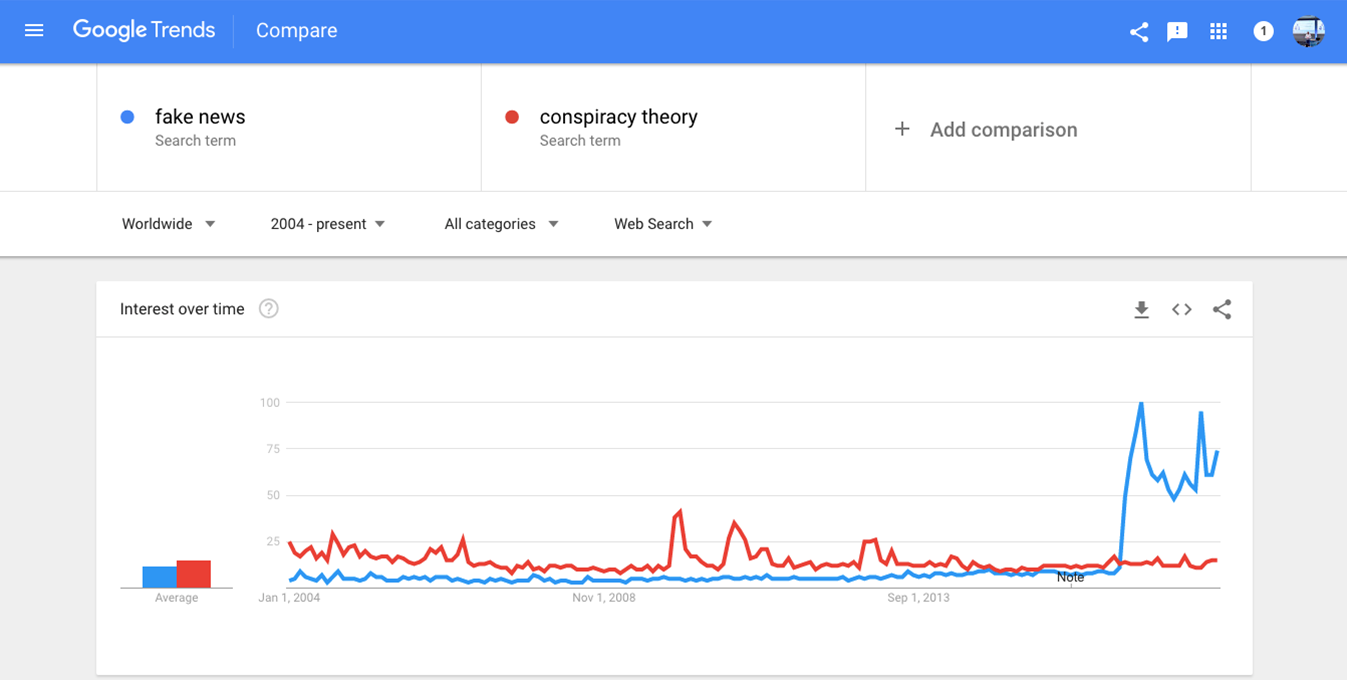 Fake content and fake news has been everywhere. And it’s been known by a lot of terms…

The history of fake news

Fake news has existed throughout history.

Back in the ancient days, almost 2,000 years ago, in 79A the volcano Vesuvius erupted near Pompeii, Italy. Approximately 2,000 people died and were buried in the ashes. One of them was Plinius the Elder, a Roman author, naturalist, philosopher, a naval and army commander of the early Roman Empire. He was rich and powerful.

Hi nephew, Plinius the Younger, wrote letters to the Emperor of Rome, giving vivid eyewitness accounts of the day of the eruption, portraying his uncle as hero who died during rescue efforts.

Plinius ever told the Emperor that the purpose of his letters was to create a legacy for Plinius the Elder, and told him to keep them so that when he was long gone, future generations would find the letters and remember his uncle as a hero and ensure of his heritage.

Other examples Bas quoted were the conspiracy theories behind crop circles, the witch trials of the 16th and 17th centuries in which it was claimed that people did things that weren’t humanly possible), and WWI propaganda.

People started to believe things that weren’t true because it was orchestrated in the right way – and this orchestration was one of the foundations of public relations.

Edward Bernais, the nephew of Freud, used propaganda and psychological methods to make people buy more American products by sending out information that was misleading. His book Crystallizing Public Opinion contains tactics and strategies on how to make sure people will believe almost anything you say.

Bernais used those tactics in the early years of the last century to make sure that Americans felt that they needed to buy American products. This is a sentiment we now readily associate with the US; Americans wanting to buy their own products in now engrained as archetypal of the American character.

Trump keeps talking about ‘American first’ – but it was this book that helped Bernais get into the business of PR and helping the American government to convince the public they should buy American products. 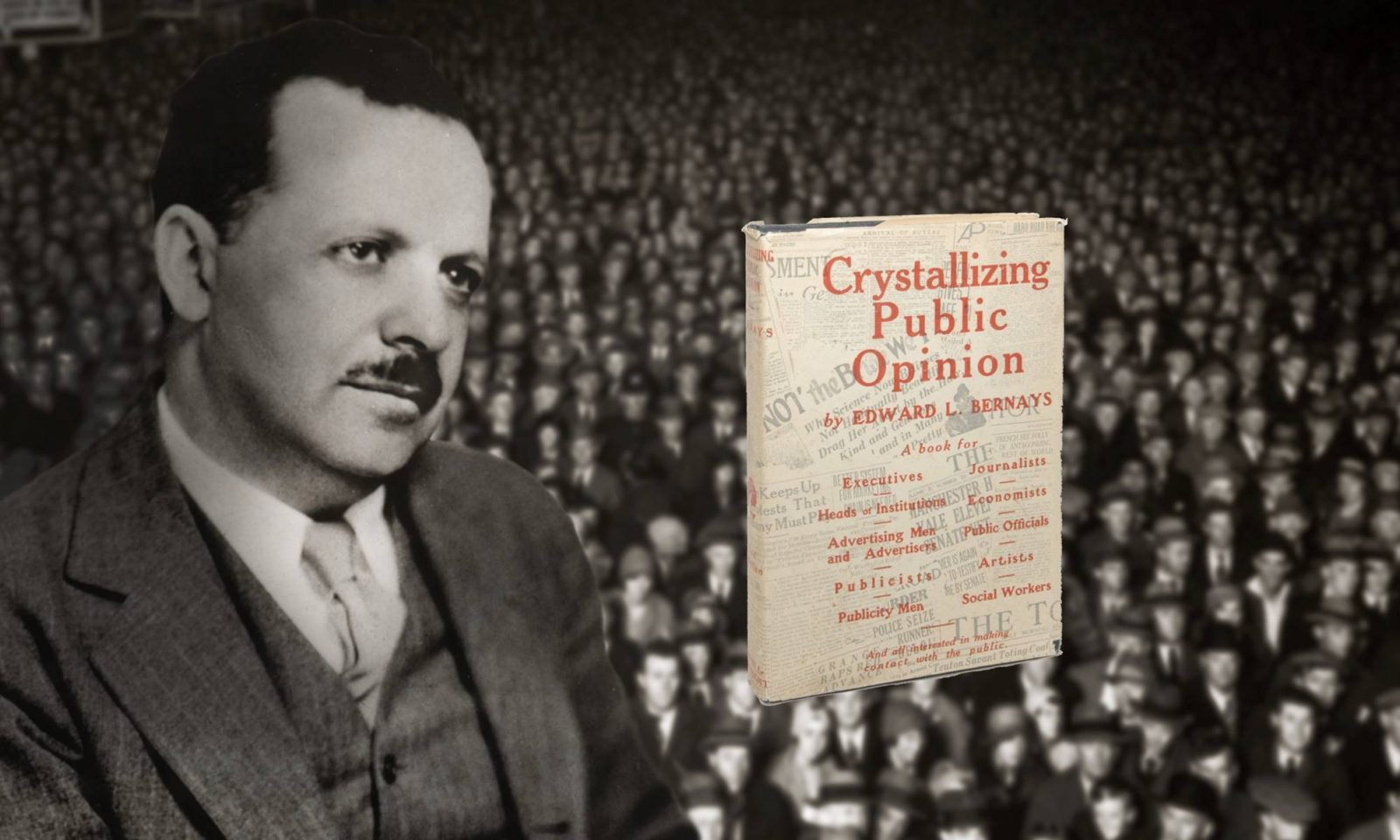 When the World Wide Web first came into existence, it was supposed to be a free democratic answer to misleading information. The internet would “make everything honest”.

There’s the hoax that Australia doesn’t exist, fake reviews, and even a fake restaurant: ‘The Shed at Dulwich’, which managed to earn the top spot on TripAdvisor after numerous fake reviews flooded in.

Bas defines it in general as “content that is inaccurate, created to deceive, disrupt or push an agenda”. It always has a reason – usually to get attention, push an agenda or make money. The latter is particularly pertinent to the internet age and can be measured in ‘clicks’ and ‘views’.

People can’t help themselves. Some of the most powerful motivations are:

… and each has their own purpose: 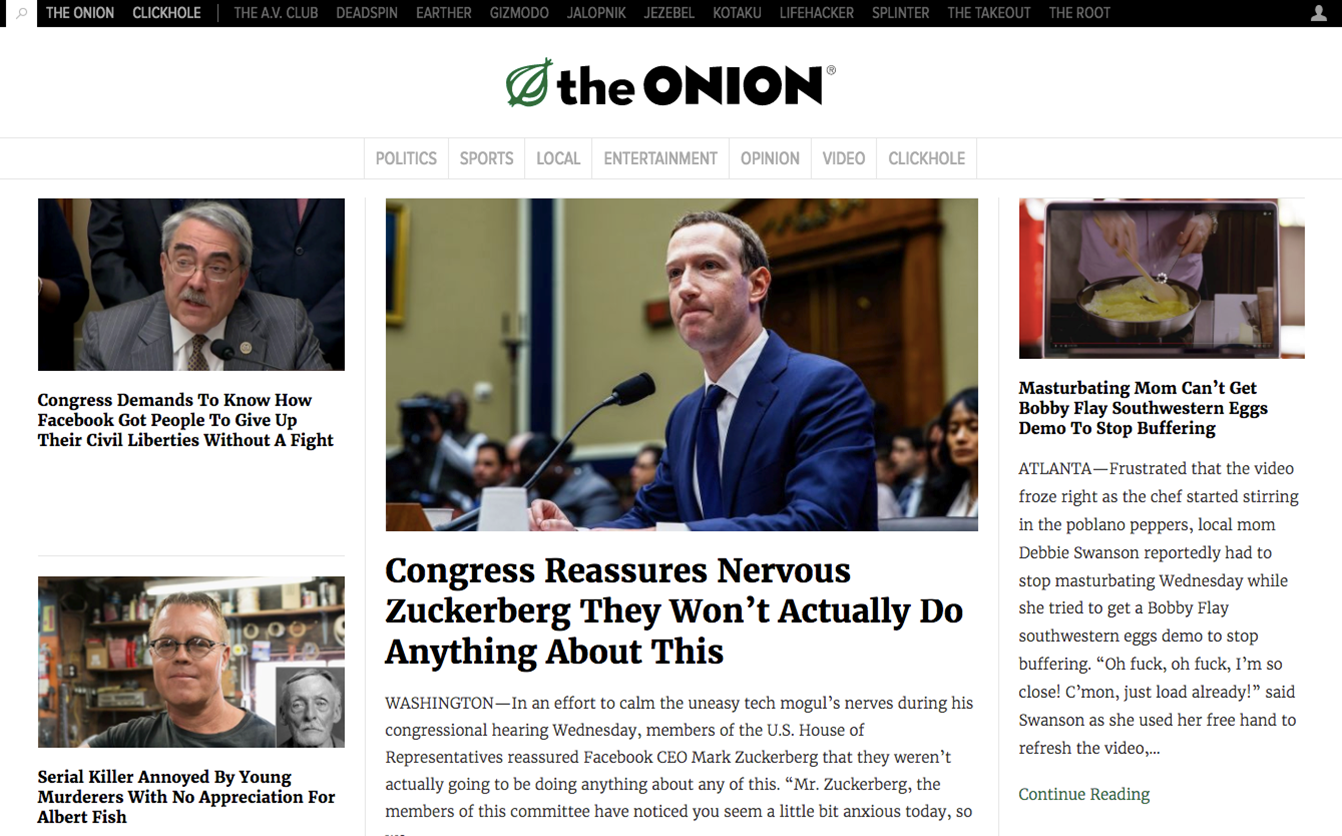 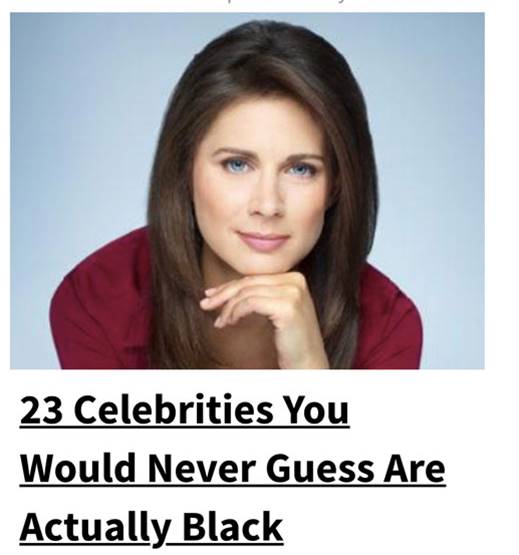 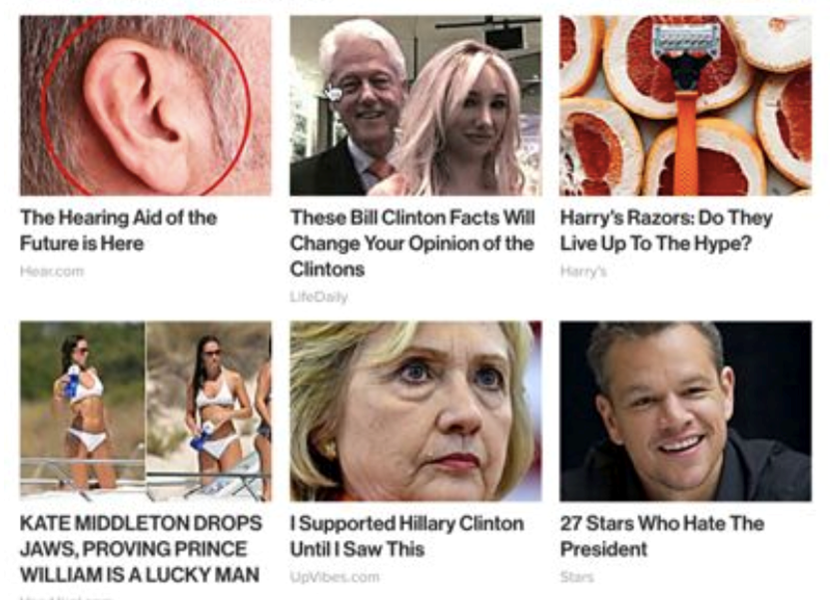 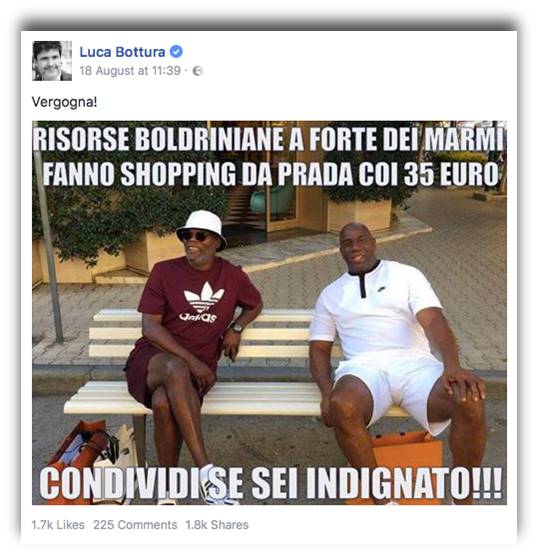 This photo purported to be of immigrants misusing the 35 euros paid by Italian citizens for accommodating refugees and was condemned on social media worldwide. It was, in fact a photo of US stars Samuel L Jackson and Magic Johnson after they’d been on an extravagant shopping trip. 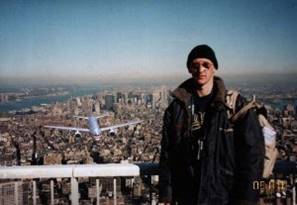 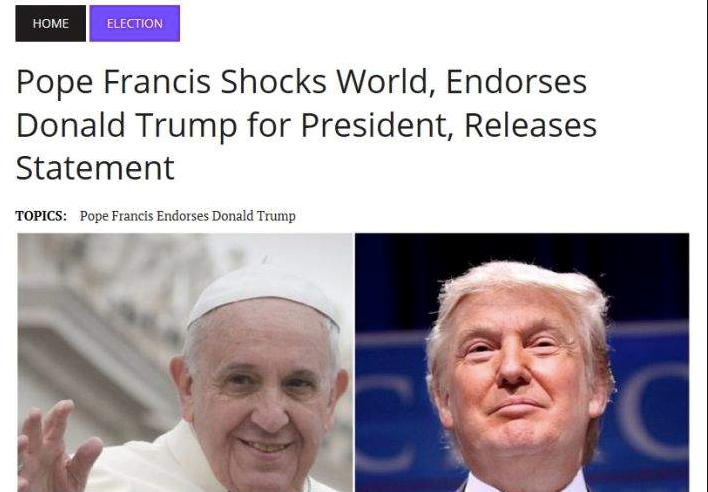 Many tactics have been used and talked about in the past year. Fake accounts and bots are probably the most discussed.

The tactics are however much more sophisticated than we can imagine. Bots are easy to track. So, apparently, the creators of fake news in some countries in Eastern Europe don’t create their own Facebook pages, buy them from kids and then change names.

If you get enough people to search for a phrase, it can start appearing as a Google autocomplete suggestion, leading to people clicking on those links.

For example, Trump repeating: “Obamacare is a disaster”.

Getting into their bubble

We all live in ‘bubbles’ on the internet, ie, as part of those online communities who have shared beliefs and interests. On platforms such as Facebook, algorithms feed you information that they feel fits your needs, based on factors like you friends and behaviour. Infiltrating these bubbles can give you massive influence.

Another way to invoke trust is to aim to appear in local news for multiple regions. People generally put more trust in local news, which allows information to be spread from the bottom up.

Following on from the previous point, targeted advertising is a popular, straightforward way to get into people’s bubbles.

It’s not about the facts, it’s about emotion

Why do we believe fake content? We can check or in some case see these things are wrong, so why don’t we just ignore it?

The truth is, making someone believe something isn’t about the facts at all: it’s about evoking emotions (particularly anger), reinforcing a memory and rationalising habits.

This takes us back to Bas’ opening statement: we want to be fooled. It tickles our imagination. This is why books, TV shows and movies do so well. We want to be taken into a different world.

People act on what they remember

If there is too much novelty, we forget. Details of memories get lost. We fill in the details that we miss based on what we’ve been taught. This means that what becomes before and after a message matters.

As a result we believe things that never happened. If someone uses ‘based on a true story’ we tend to believe it more readily.

There are examples of people remembering 911 stories, while they weren’t even in the neighbourhood. We think we remember stories from our childhood where we actually just remember the photos taken.

It’s difficult to change people’s habits and beliefs and prefer content that reinforces them. We make judgement calls based on what we know or think we know. Our background plays a huge role in this, determining how we think. This means our opinions and judgments are biased from the start. Marketers know this and play on it

We want to hear what we believe

In the end, you can argue that consumers are complicit – we, as users, are to blame. Added to this, AI and VR will make is easier to propagate.

Bas argues that marketers we need to educate those we are targeting, teach them to check their intuition and question everything they see.

Watch Bas’ talk ‘How Your Audience Will Believe Anything: The Psychology Behind the Fake News’, or view slides below

For more detail on the 2018 Benchmark Search Conference, you can view all the talks and slide decks here. Alternatively, you can check out our resources page for even more actionable insights, or contact us today to see what we can do for your brand.

Returning for a second time at the Benchmark Search Conference, the ever popular Omi Sido, Senior Technical SEO at Canon…

AI is not going to take over the world or replace human intelligence, even at its most powerful. Instead, it’s…

Co-founder and CEO of On The Tools, Lee Wilcox took to the Benchmark stage to explain how video has helped…