So Click Consult threw their support behind the 20 year-old local lad from Chester last week as he took to the saddle and cycled the equivalent of the height of Mount Everest in just one day – 29,035ft – to raise money for those hit by the Nepal earthquake.

Through adversity to Everest…

Having overcome adversity in his own life, Alex has set himself a series of tough endurance challenges called EPIC7 ‘Through Adversity to Everest’ – each one raising money for the Himalayan Trust UK while taking him one step closer to his ultimate goal of reaching the Everest summit. The Trust focuses on helping the Sherpa community in Nepal rebuild their lives and provides basic needs following the Nepal earthquake disaster earlier this year, which claimed more than 9,000 lives.

When we heard about local lad Alex’s plans for his most recent fundraising adventure, Click was keen to getting involved by providing sponsorship and encouragement.

Matt Bullas, Click’s CEO, said: “Alex is passionate in his beliefs and his determination to make a positive difference to the world.  He’s an inspiration and we’re proud to support him on his journey.” 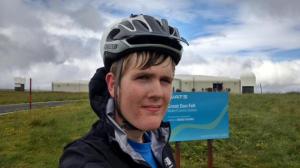 To complete his mission of cycling the length of Everest, known as ‘Everesting,’ Alex had to make 14 continuous ascents and descents (about 130 miles) of Great Dun Fell in Cumbria one of the highest road climbs in the UK, within one 24-hour period.

Alex and all his supporters were ecstatic to when he finished within 21 hours, making him the youngest person to do so and one of less than 200 people worldwide. 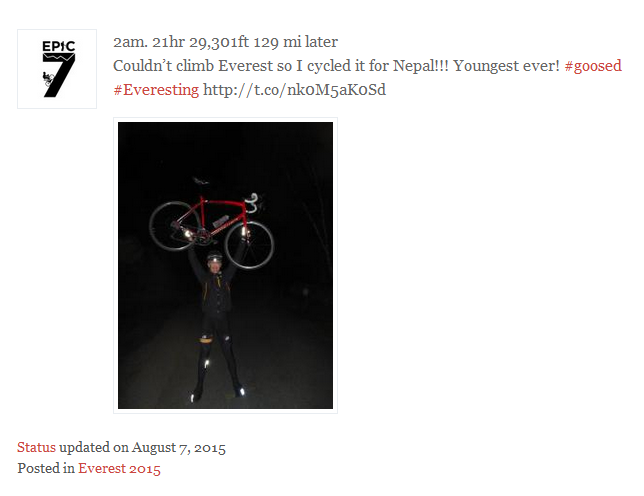 During the his 21-hour Everesting session, Alex used an estimated 7,000 calories – about the same as 7 fish & chip suppers

Passionate about giving something back

EPIC 7 is just the latest in a series of challenges Alex has completed to raise funds and awareness for causes close to his heart, including

He’s received acclaim and encouragement from Bear Grylls, Sir Ranulph Fiennes OBE and Sir Chris Bonington CBE CVO, but Alex himself best sums up what drives him on: “I am passionate about living to give something back, not to simply exist. I want to fulfil my potential when young people are expected to follow the beaten path and learn just how far I can push myself to achieve my dream.”

Read Alex’s story of triumph over adversity in his own blog, or contribute to his JustGiving fund and help him make a difference to Nepal’s Sherpa community.

If CRO isn’t integrated into your online marketing strategy, it’s likely that you’re leaving money on the table Conversion rate…

While we wait to see how its roll-out of ‘click to buy’ buttons pans out, here’s some interesting stuff you may not know you can do on Twitter

Lionel Richie has enjoyed an upsurge in popularity following his Glastonbury appearance earlier this summer, sending his 2003 greatest hits…

At Click we’re lucky enough to be based a stone’s throw from two two vibrant cities, Chester and Liverpool, and this week we’re throwing ourselves behind a celebration of scouse nous

At Click Consult, the final week of July started with a message from Google Search Console, informing us that one of our client’s websites had been hacked. Disaster!

What psychological principles can we apply to cut throught the clutter and optimise the impact of our marketing campaigns and improve conversions?

An almanac of analytics wisdom as used by the Click team

Ad blocking has attracted media attention recently, partly triggered by the announcement that Apple’s latest Safari release will include ad blocking tools. Do online advertisers need to be concerned?

In the brilliant sunshine (almost unprecedented weather in Manchester), digital marketing professionals from all over the UK and beyond flocked…