Not the end of the world?

A month on and the smoke has cleared: has Google’s mobile algorithm justified all the hype?

In February this year, Google announced that it would be rolling out a new search algorithm which was specifically designed to assess the mobile friendliness of websites.

When Google’s Zineb Ait Bahajji stated that their mobile friendly algorithm was set to have more of an impact on the search results than either Google Panda or Penguin, the SEO world collectively braced itself for massive ranking changes on the 21st April.

Unusually, the update was even picked up by the national press, with The Telegraph being just one of the major publications to label it ‘mobilegeddon’.  It thus became a key talking point for businesses around the world prior to its launch.

Google had been keen to encourage webmasters to make their websites mobile friendly for some time, with mobile friendly SME sites amounting to just 6% in the UK and US, despite recent claims that 50% of searches are conducted on mobile devices. It’s therefore easy to understand why Google would want to penalise websites that weren’t providing a good experience for users on their device of choice and reward those who were.

The algorithm decides whether or not a web page is mobile friendly; if it’s deemed to offer a poor user experience, this will result in a ranking drop for searches conducted on mobile devices (desktop search results are unaffected).

The 21st April 2015 wasn’t quite the end of the world which had been predicted, with ranking fluctuations only marginally larger than normal. As the days passed, and more pages were crawled with the new algorithm, we began to see a larger number of changes: the general trend has been for non-mobile friendly pages to drop only a small number of positions with this isolated to mobile search results as Google had promised.

However, there were a couple of instances of non-mobile friendly websites seeing their rankings actually increase on the back of the update. This was largely in industries where the majority of competitors were equally as mobile uncompliant. This raises some important questions. Were these changes just normal fluctuations or is the mobile algorithm more than just a yes/no answer? Does Google now place greater emphasis on other mobile factors such as page load speeds which were already believed to be part of the ranking algorithm? The answers to these questions are presently unclear.

Unsure whether you’ve been affected? Our blog from earlier this month gives you 3 clues your site’s been hit by Google’s mobile-friendly algorithm.

Regardless of the impact on rankings, Google claims that there are now 4.7% more mobile friendly websites than there were before the mobile algorithm was announcement in February. If the purpose of the out of character two months advanced warning was to encourage webmasters to make their sites mobile friendly, then they can consider this to be mission accomplished.

One of the companies that appears to have changed its mobile solution over this period is Next. However, the implementation seems to have gone awry with Google considering the site to be mobile unfriendly, resulting in an initial drop of 38% organic search visibility according to SearchMetrics: 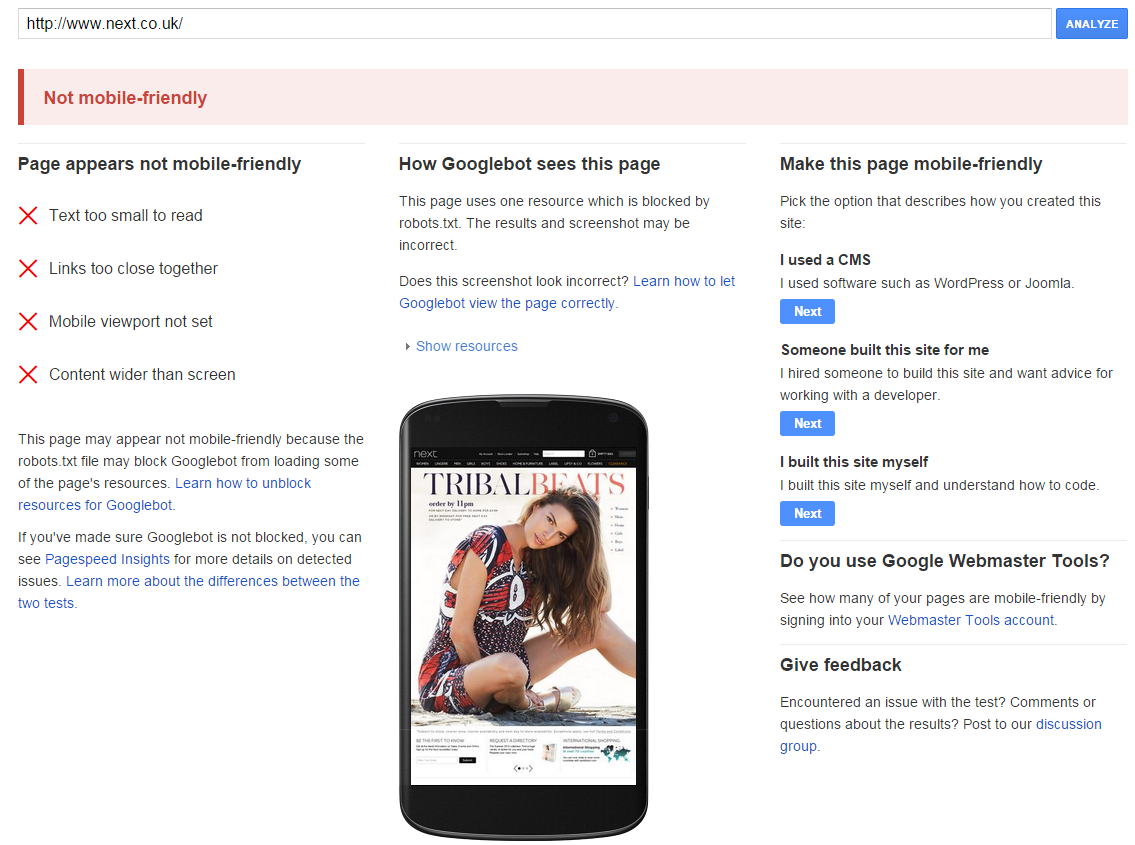 Indeed, Next appears to be unclear on its mobile strategy, with a folder level www.next.co.uk/mobile URL live as well as a m.next.co.uk subdomain. Mobile users are currently not automatically redirected to either of these pages and there are no visible links on the desktop page to allow users to choose the mobile equivalent; it is effectively orphaned from the site. Next has also failed to use the rel=alternate tag to make Google aware of either of these pages.

Things get worse when the pages are examined: www.next.co.uk/mobile is mobile friendly, but asks users which version of the site they wish to use: 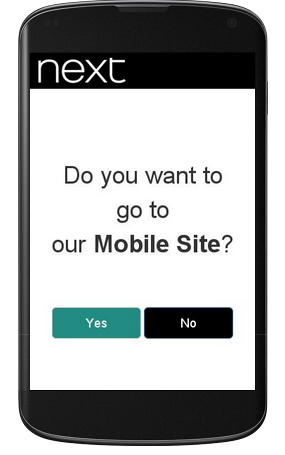 Search engine spiders are then unable to follow the link through to the mobile subfolder which appears to have been chosen as the mobile solution due to it being disallowed by robots.txt:

At the time of writing, this issue has not yet been addressed by the brand which will be having massive implications on the traffic they are getting from mobile search results. The latest stats from SearchMetrics suggest despite the gap decreasing, there remains a -29.47% discrepancy between search visibility in mobile search results compared to those in desktop search results for the brand:

The ultimate conclusion here is that next.co.uk has been one of the biggest losers from the mobile algorithm in the UK. However, this is not due to the algorithm itself; instead, it is down to the poor implementation of a new mobile solution designed to adhere to the requirements of the latest algorithm.

Another big loser from the mobile algorithm, according to SeachMetrics data, has been reddit.com, who are down 27% for their mobile search visibility. This appears to be due to their failure to provide a mobile friendly design for users on the majority of their landing page; hence they’ve been hit by the algorithm in exactly the way which would have been anticipated prior to its launch.

SEMRush data suggests that their rankings in the top 20 results of Google’s organic rankings brought the site 1,945,075 visits from the UK alone in April 2015. If Google’s statement that 50% of these searches are conducted on mobile devices is accurate, the potential implications of this visibility drop are obvious.

Another big loser for exactly the same reason has been nbcsports.com, and again this is due to their failure to provide a mobile friendly experience on their landing pages.

A pattern observed by SearchMetrics which applies to those who have been impacted by the update is a significant drop in mobile organic search visibility, while desktop organic search visibility has remained stable over the same time period. This appears to confirm that the algorithm is working in exactly the way that Google had suggested, with mobile Google search results being impacted in isolation from those on desktop.

The end of the world?

To summarise, Google’s mobile update has not yet resulted in the ranking shake-up which had been predicted prior to its roll out. While the search engine giant has stuck to its word in ensuring that only mobile results have been impacted and achieved its aim of encouraging a greater number of webmasters to adopt a mobile friendly site, the overall impact of this has been marginal so far.

The ranking drops seen by Reddit.com and NBCSports.com demonstrate that the algorithm is working as intended.

So why has the impact not been more noticeable in general?

When you consider that so few small businesses in the UK and America have a mobile friendly website, it’s no surprise that there have been few ranking movements in the majority of verticals: there’s no reason for the algorithm to change the results if there are no mobile websites to reward.

An opportunity to thrive

The good news for non-mobile friendly websites that haven’t seen any noticeable drops in organic traffic over the past couple of weeks is that adopting a mobile friendly design presents an opportunity to gain an advantage over slow-off-the-mark competitors.

The latest algorithm has been designed to allow websites that improve to feel an immediate benefit, rather than having to wait for the next refresh.

The responsiveness of your website has never been more crucial to your organic search visibility – find out more about our mobile-friendly strategies.

Will this month’s ‪mobile algorithm‬ blow Penguin, Panda & Hummingbird out of the water?

Did Google sneak in an algorithm update this month? No, it’s just lost patience with low quality, manipulative content.

Sponsored by Click, the Northern Marketing Awards celebrate the cream of the northern marketing crop. Could you be among the winners this year?

The great conundrum of the online age… attribution.

Analysis released by The Drum this week has placed Click among the top 20 search marketing agencies in the UK.

Ever wished there was an at-a-glance guide that gave you power tips for every social platform at your fingertips?

Twitter launched Periscope yesterday. It’s a bit of a game changer for social, bringing it back to the grass roots…