As the most wonderful time of the year fades in to memory – with secret Santa gifts all exchanged, and as the final few fell to Whamageddon, every single blog in the industry published their 2020 predictions – we just don’t want to feel left out

Whether they asked everyone the morning after a very heavy night or not, I can’t say, but the Econsultancy predictions this year were almost uniformly depressing and SEO-is-dead-ish. The prediction from Searchmetrics encapsulated a lot of them, stating:

SEO is will start to become way more accessible, but ultimately less of a career

To which I’d say – how many people do you know that hang their own doors/maintain their own cars or any other of countless skills that are relatively easy to do (at least to a point)? Even if, as the explanation states:

“The no-code and low-code movement will make the development of both websites and internal SEO tools more accessible to a larger number of individuals. Without being a developer, you can now start to use and combine tools like Airtable, Shopify, Webflow, SquareSpace, Typeform, MailChimp, HootSuite and IFTTT to run business operations of almost any complexity.”

There is still a barrier to entry here that can be both expensive financially and time consuming. Just because there may be an improved set of tools for a job which make things easier for a professional doesn’t mean that everyone will suddenly develop the time, desire or money to purchase the tools and undertake the work.

The next set of predictions (they seem to fall in to one or the other category in this collection) seems to say SEO is dead for another reason – the number of searches resulting in no click, the theory popularised by Rand Fishkin and Jumpshot. 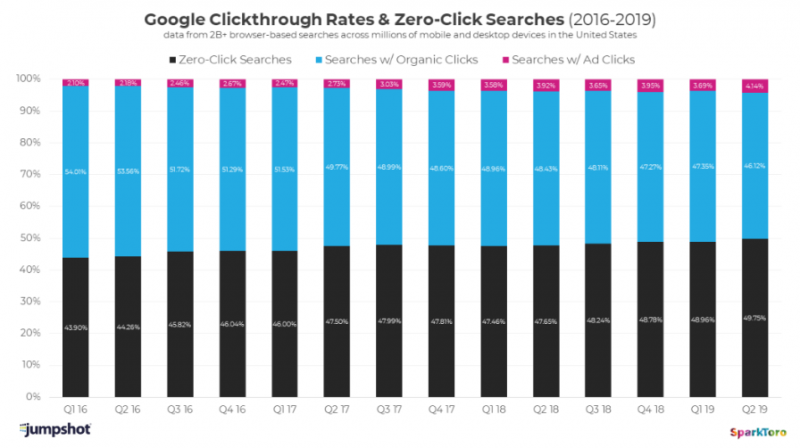 In August, SparkToro’s Rand Fishkin unsettled the industry by publishing data showing that for the first time, a majority of browser-based searches on Google resulted in no click whatsoever – confirming that many of SEOs’ efforts to drive traffic to their websites will yield diminishing returns.

While it’s almost impossible to find (or has been for me, at least) a definitive number for the searches made per year after 2012, there have been estimates of 1.2 Trillion in 2018 and up to 3 Trillion in 2019. For fairness’ sake, I’m going to halve the second estimate (doubling seems unlikely in a year at this point). So from 2018 to 2019, I’m going to assume a growth of 0.3 Trillion. 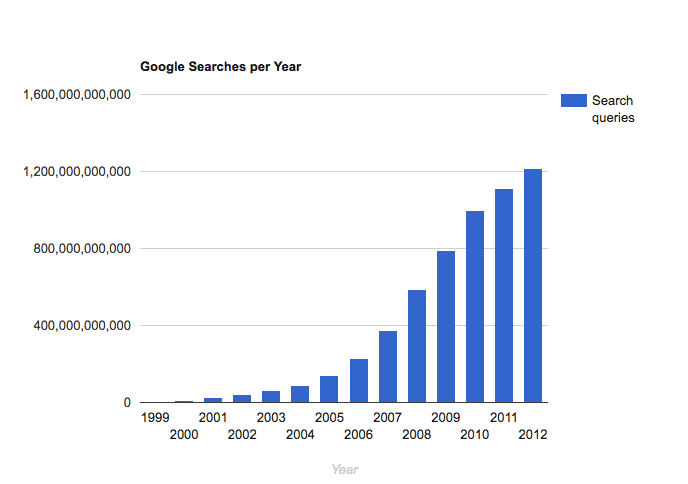 While I have a good deal of respect for the work that Rand Fishkin does, this kind of thing riles me a little. Even assuming a relatively small increase in total searches, the end result (even if the numbers aren’t those mentioned above) is likely to be a boost in the total number of organic clicks.

This is not to say that Google shouldn’t be held to account for infiltrating certain SERPs with their own tools or for trending toward their own properties, it’s just that it produces predictions like the ones in the Econsultancy blog linked to above that are filled with doom and gloom.

In actual fact, though we’re getting a smaller slice of the pie, it’s a much bigger pie (honourable mention to Will Critchlow of Distilled, who seems to be the only one who got a decent night’s sleep before making his more optimistic – and more likely – prediction) and until we have the all of the necessary information, these kinds of studies really aren’t especially helpful.

I had intended to cover a number of individual site’s predictions, but in actual fact there’s little to distinguish the predictions I’ve come across from the sites I normally read. The rest of the predictions that don’t fall in to the two categories above fall in to a couple of other generic types:

You can’t optimise for BERT, therefore optimisation is essentially pointless

For a given definition of “can’t”, I agree. However, there are still things we can do to assist machine understanding of our copy and content. As I’ve stated elsewhere, there are machine learning algorithms and neural networks littered through the process of calculating any SERP and each of them is making a number of value judgements – you may not be able to directly optimise for any specific algorithm, but there are methods (from schema markup to correct use of HTML, and good use of the English language and its many rules) that are optimisation by another name.

There’s still a considerable distance to go before machines can make the snap judgements about quality that a human can and BERT itself is intended to determine meaning rather than quality (making it more related to entity search than a determination of quality for rankings purposes), so optimisation is neither redundant nor even reduced in importance – there are just different methods we need to employ.

Haha! We told you voice wouldn’t be 50% of search

Many of these come from the same sites that have featured the phoney ComScore stat back in 2016 or whenever it first reared its head, and have made regular ‘year of voice’ predictions every previous year. This year, however, they’re right – 2020 will not be the year of voice either. You will know the year of search, because it will directly follow the year that a subvocalisation device that doesn’t make the wearer look like a plank and is cheap enough for general purchase.

Until then, we’ll see increased utility, better understanding of accents and more – all of which will add to the eventual rapidity that voice will become ‘a thing’. So, while many of these voice predictions scoff at the very idea that voice will ever be important, take more notice of the slowly increasing number of brands selling by voice on Amazon’s Alexa and Google’s Assistant and start laying the foundations, because we will not be given a great deal of warning when the year of voice finally arrives.

For SEO, this means ensuring our structured data is on the money, our content is easy to parse and that we’re well positioned in industry applicable knowledge graphs.

Slightly more useful than the predictions this year, is the Think with Google 2019 Research Review which summarises a year of insights.

Of particular relevance to SEO are points 3 & 4 – which are:

There are nine stats in this section (including the following ), all of which suggest that in addition to traditional search terms, brands need to expand their offering in local and immediate searches (online stock checks and local offers, as well as competing for ‘right now’, ‘near me’ and ‘best’ terms).

Traditional industries are transforming with digital

I gave a talk early last year to a crowd of automotive industry people on this topic, but the trend goes beyond the automotive, with Google giving two other traditional industries seeing major rises in digital interest. The more comfortable we are with being online, the larger the purchases we’re prepared to make, but also the more we expect to be able to handle online – leading to impressive growth in searches looking at the finance and grocery sectors.

Yeah, I know that was 2015, but with major rollout expected of 5G by the majority of networks expected to be completed by early 2020, and the devices that can use it set to follow throughout the year, we can expect a significant uplift in mobile search throughout 2020 – and, as a result of improved performance – are likely to see an uptick in the use of things like AR which have suffered from mobile usability issues so far.

As the speed of connection improves and the handset performance meets it, the number of things we can use our mobile for is going to grow – and that means that we need to improve our approach to SEO for mobile (which, by Google’s estimations, has actually gone backwards since Mobile Friendly 2).

2020 will be another highly volatile year in the SERPs

There have been two of them in a row, now, so it probably doesn’t seem like a prediction – but with 2020 likely to see at least as much volatility and at least as many update scares, we need to start examining the relationship between visibility and sessions more carefully. While I’ve seen more blogs cropping up that are encouraging brands to move away from specific keyword positions as a performance metric (looking to growth overall instead), the growth in longer searches (not just long tail, but longer in total words used) over the last couple of years and the slowly increasing number of useful (for brands at least) voice searches, the utility of being number one for the fat head term is increasingly questionable (though obviously not for every industry).

We need to take stock of where our traffic is coming from and really examine our keyword strategy to make sure we’re worrying about the right things, because the increasingly volatile SERPs are going to give us a lot to worry about otherwise.

2020 will test brand’s commitment to SEO

2020 is likely to see an economic downturn and marketing budgets are often the first things to take the hit. While, as I’ve pointed out previously, there is ample academic research showing that maintenance of marketing budget (and increasing it) both improve performance during periods of economic turbulence, there are often cuts made. In digital marketing, it can often be tempting to move budget from SEO – which can be quite difficult to definitively prove ROI for (especially if there’s link building involved) – to PPC which is eminently ‘provable’, but every penny diverted from organic to paid is lost ground to a competitor that maintains momentum.

It will be interesting to see, if the economic slowdown occurs, which brands stay the course and benefit at the expense of those that transfer their budgets in the hope of short term gains. You can see some more of our predictions for 2020 below: 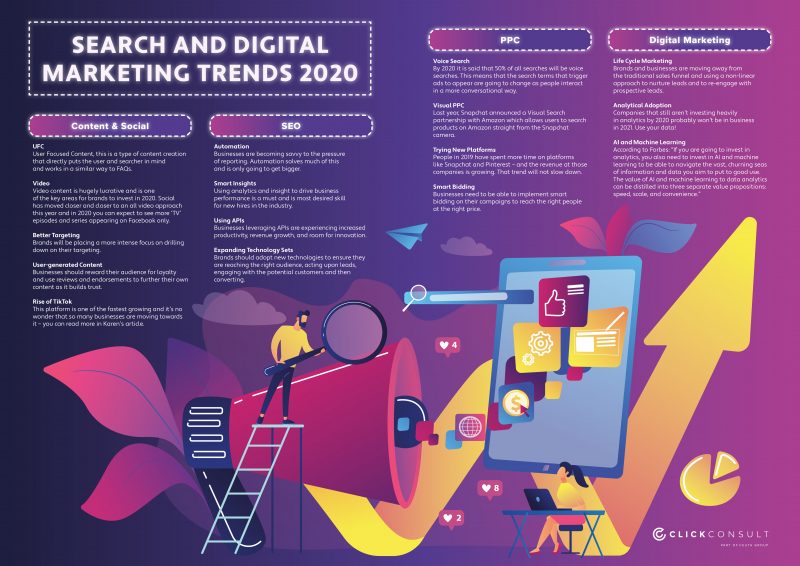 Keep up to date with 2020 (and see how we fare) by subscribing to our mailing list – or check out our resource section for actionable advice. Alternatively, get in touch to see what we can do for your brand in 2020.

One of the UK’s largest independent care providers, Agincare, has selected award-winning search marketing agency Click Consult, to manage their…

It will have escaped no one’s attention that the heads of Amazon, Facebook and Google were called upon to testify…