Search Google by date with new before: and after: search commands

Users can now skip the Tools tab and narrow down results from the search bar. Google has announced a new search bar command that enables users to filter results for a desired date range. The “before:YYYY-MM-DD” and “after:YYYY-MM-DD” shortcuts yield results for before, after, and within the dates specified.

Filtering by date can also help clarify the impact that seasonality or breaking news may have on your content’s performance. The addition of the before: and after: commands make it more convenient to access this information.

New analysis  of more than 73,000 business locations, conducted by Uberall, asserts that 96 percent of SMBs, mid-market and enterprise businesses with offline locations fail to meet the criteria for voice-search readiness (VSR).

Uberall identified “37 directories that directly feed voice search platforms,” which include the major virtual assistants. The big three (or four) were Google/Maps, Bing and Yelp but the list includes Facebook, Foursquare, Factual and numerous others, some of which are obscure and have little or no direct consumer traffic.

Uberall then compared business listings across all these sites and scored them according to the accuracy and completeness of their profiles in the following categories:

Multiple sources have concluded Amazon has a growing fake-reviews problem. Yet the majority of consumers appear to be unaware of it, according to new consumer survey data from CPC Strategy (part of Elite SEM).

Majority trust Amazon reviews. The survey of 2,001 Americans who’d made at least one purchase on Amazon in the past six months, found that while price was the “biggest factor” in their decision-making, reviews were also a significant consideration.

Google announced Monday morning that for those who have an Android app associated with their website can now get data about the app’s performance in Google Search Console. You can now see your app’s clicks, impressions, CTR, and position with a separate search appearance in the performance report.

Viber, the messaging app has confirmed that users now have the option of subscribing to have “local numbers” that can receive phone calls and SMS messages as if those calls and messages are being sent to mobile numbers in specific regions. Viber  Local Number, as the service is called, is available to anyone globally but for now the numbers you can register are in the US, UK and Canada, with more countries getting added soon.

Viber Local Number will sound fairly familiar to people who have used other messaging apps and VoIP services.

Skype, for one, has offered the option of getting a local number in a specific region, both to make and receive calls, for years. There have also been companies that have stepped into the feature gap between the existence of the capability and Viber yet to launch anything of its own.

Google has spent years building out a third party partner/reseller network focused on small businesses (SMBs) and in the latest survey by BrandMuscle, the marketing tactic seen as  the greatest priority came out as paid social.

The chart below shows the importance placed on different facets of marketing according to the respondents: 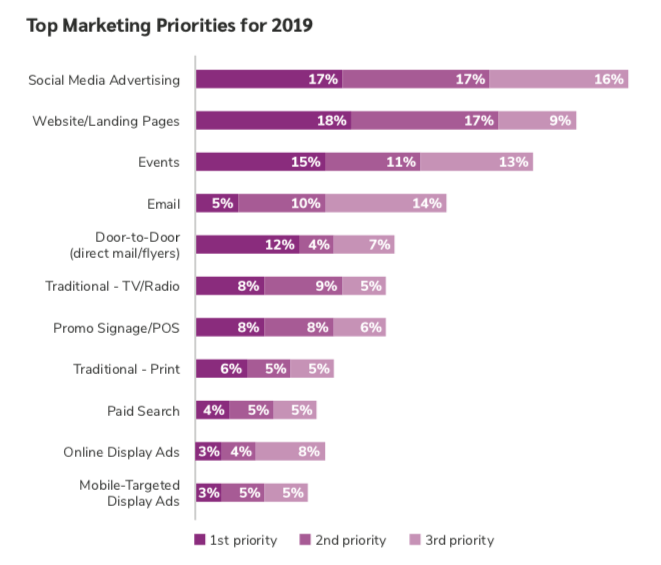 According to a piece on Search Engine Land, one of the “positive” findings, was that most of the SMBs in the survey recognised that their marketing was not keeping up with consumer behaviour.

Less than a third of respondents judged their marketing programs “up to date.” And 84 percent wanted to learn more about marketing to improve their performance. This indicates an ongoing appetite for more education.

Over the weekend Many SEOs and site owners reported seeing pages drop out of the Google search index. The issues were visible in Google Search Console and when using the site command in a browser.

It was apparently the result of a technical issue at Google, according to Google’s John Mueller. Mueller said it has been resolved.

“We had a technical issue on our side for a while there,”  Mueller tweeted early Saturday morning. He said the problem should now be resolved and “the affected URLs reprocessed.”

Site owners who saw large percentages of pages no longer show as indexed in Google Search Console should now see the problem resolved.

We keep on top of these things so you don’t have to – contact us today to see what we can do for your brand.