We’re looking into a new indexing issue that started escalating 6 hours ago. The issue is unrelated to yesterday’s outage and we’re working hard to resolve it. We’ll update this thread when we can provide more information.

The name of the website and its icon appear at the top of the results card to help anchor each result. Site owners can learn more about how to choose their preferred icon for organic listings here. Google has suggested it plans to add more action buttons and previews to search results cards, to give a better sense of the web page’s content with clear attribution back to the source.

The change will also affect how ads are displayed. A black ‘Ad’ label replaces the green label, which is displayed at the top of the card along with a URL. 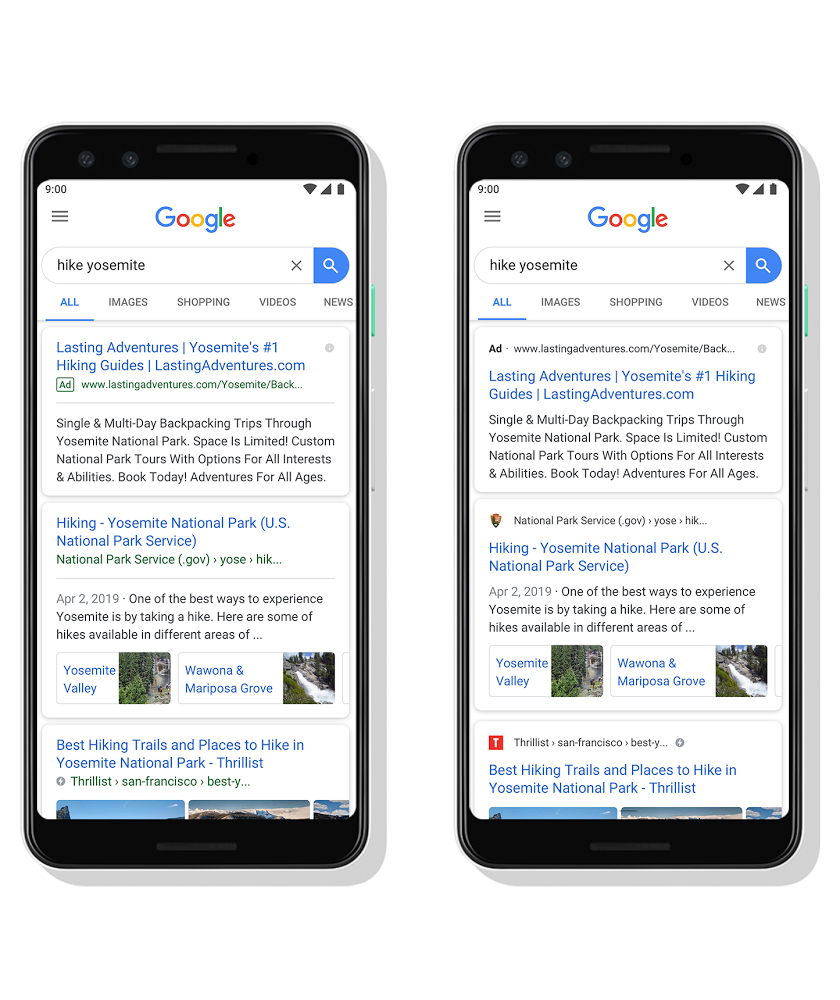 Before and after (Source: Google)

Google seems to have stopped indexing recent content from news sites like the New York Times and the Wall Street Journal. Google has confirmed there is an issue they are working on:

We’re currently experiencing indexing issues that may cause stale search results in some cases. We’ll update this thread when we can provide more information.

Google will continue to work with Huawei after the US government handed the technology companies a temporary reprieve from trade restrictions that threatened to cripple millions of smartphones in Britain. The US Commerce Department has granted a 90-day licence for mobile phone companies and internet broadband providers to work with the Chinese manufacturer to keep existing networks online and protect users from security threats.

Google’s share price plummeted by 2.5% yesterday after it suspended business with the Chinese tech giant, whose smartphone has seen astronomical growth, stoking fears of a ‘technology cold war’. New Huawei phones will not have access to Gmail, Google Maps and other apps.

Google confirmed on May 19th that it would block new Huawei smartphones from accessing updates to its Android open-source operating system. The decision, which comes after Donald Trump added Huawei to a blacklist of companies the country could trade with.

A new study finds that by 2050, the dead will outnumber the living on Facebook. Here’s how the company is designing user experiences to face the billions of dead users to come. according to a study published by researchers at the Oxford Internet Institute, which aimed to estimate just how many profiles on the platform will belong to people who have died, before the end of the century. Based on projections of Facebook’s number of users growing 13% every year, they calculate that by 2100, there could be more than 4.9 billion dead profiles on the platform.

Carl Ohman, one of the authors, said: ““Never before in history has such a vast archive of human behaviour been assembled which spans pretty much every continent, yet all this data is hidden away, controlled by a private company with no insight, no security, and basically no other leading principle than to maximise profit. That is problematic from a societal point of view.”

Google has updated its Quality Rater Guidelines – the new version is dated May 16, 2019, and replaces the one released back in 2018. According to search engine marketing expert, Jennifer Slegg, one of the most noticeable changes is Google’s move away from using the term ‘EAT‘, replacing it with “page quality”, perhaps signalling an emphasis on “the context of quality on a page or website”. The updates also cover:

We’ll be publishing our own analysis of what these changes mean to marketers later this week.

Google has announced that’s it is still working to correct historical incorrect data from a bug which hit earlier this month, which means store visits and store sales data is still inaccurate from 12:01am on April 30 to end of day May 2 (Pacific Time), and impacts reports in all Google Ads interfaces, including any report data downloaded via the AdWords API, Google Ads API and Google Ads Scripts.

Google said: “We are actively working to correct the data… All other data is now accurate. Google Ads bid strategy & Local campaign users do not need to take any action, as our bidding models are not impacted by the incorrect data. “We appreciate your patience as we work to resolve this issue as quickly as possible.

Structured data is important – we know this. In fact, anyone that has come within hearing distance of me over…

Journalists are always looking for a great story. From The Daily Mirror to Cosmopolitan, from Good Housekeeping to Business Insider,…