The subject of marketing to Millennials is one of the most well covered topics in marketing over the last few years – to the extent that it’s become a cliche. So why have I decided to cover a subject that just by having ‘Millennial’ in the title could put off more readers than it entices? The reason is that I think there has been a lot of misguided thinking on the subject.

It has become the marketing world’s version of the health benefits of eggs or red wine – in that there are articles, often in the same publication, sometimes months, sometimes weeks, sometimes only pages apart that give entirely contradictory advice.

Millennials, we are told, consume all their video digitally – through Netflix and other streaming platforms – something which may fall in to the ‘exaggerated’ bracket rather than entirely false, but just as Millennials certainly do still watch television (though less, certainly, than older demographics) they also defy many of the other broad-brush generalisations applied to them. 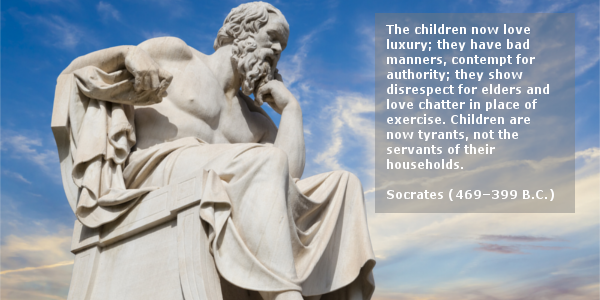 The delineation of ‘generations’ has always been a practice open to much academic criticism (c.f. The Evidence Base for Generational Differences: Where Do We Go from Here?) with the vast majority of what we refer to as ‘generational differences’ explainable by ‘period effects’ which are large socio-cultural and socio-economic shifts that impact all age cohorts to greater or lesser degrees.

To begin with, we’ll outline the two generations as they are commonly seen – using a few bullet points from their descriptions on the Psychology Today website:

To quote Alexander Dumas: “All generalisations are dangerous, even this one” – generalisations are broad brush strokes and, beyond this, have little utility. Yet the marketing industry has committed itself to pursuing these archetypes above and beyond the point of usefulness and has failed to fill in the detail that is necessary for an accurate depiction.

Returning to the idea of ‘period effects’, for example – the reasons for supposed generational differences are much more easy to understand if we consider these shifts as resulting from contemporaneous socio-cultural influence on members of any demographic cohort and the culture in which they are raised.

These period effects, rather than simple temporal cross-sections (which often overlook the fact that there are greater differences between classes than generations – or as one article put it: ‘these arguments conveniently ignore the inequalities within generations, which are greater than the inequalities between them’) are actually much better predictors of behaviour. 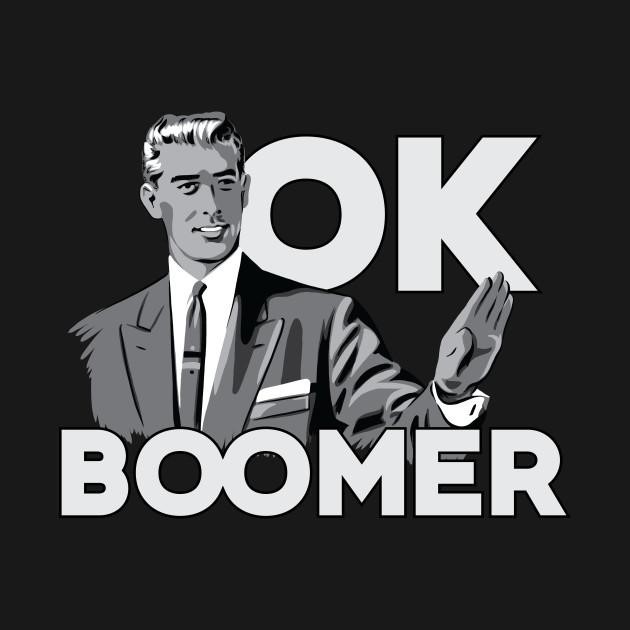 If we take a look at this in even on the most basic level (leaving out, as we always do, my own generation – Gen-X), it is easy to see that one of the main differences between the baby boomer and millennial generations (at least as far as the digital marketing industry is concerned) is, of course, the emergence of the internet.

If we take the Statista numbers, we can state that the internet reached approximately 50% of the UK population in 2004 – the point at which I’m going to say that the internet became officially ‘a thing’. By this point, Google had existed for 7 years, Facebook was brand new and the youngest baby boomer would have been around 40 (if we take the 1946 – 1964 Wikipedia cut-off points). 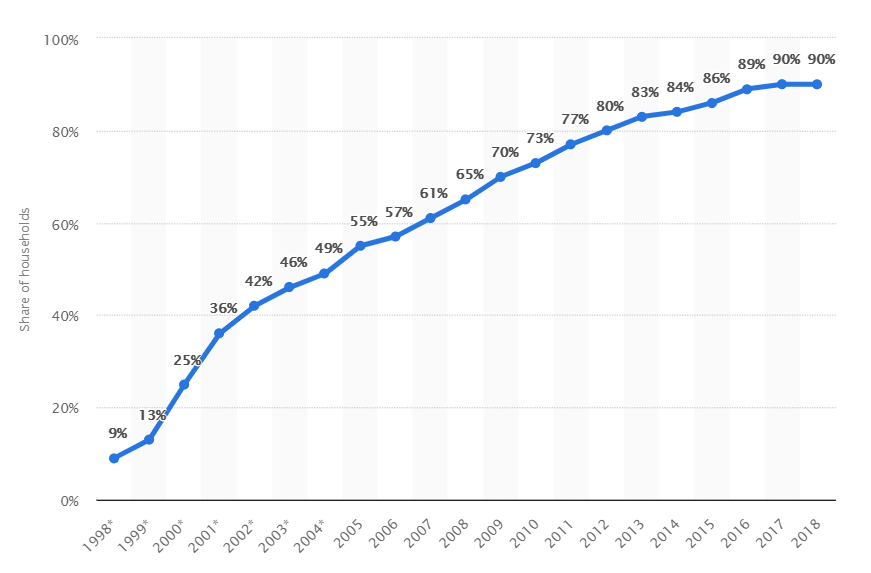 By 40, we are pretty well developed as individuals and while we may not be set in our ways by this point, it’s reasonable to state that we do have a fair idea of our preferences. The youngest millennial, on the other hand, was (again, using the Wikipedia timeline of 1981 to 1996) around 8 and, conversely, relatively unformed.

The reason I make this distinction is simply to emphasise the moment at which the tremendously impactful rise of the internet took place in the development of each demographic group. Add to this the widely recognised first ‘proper smartphone’ arriving in 2006 (the original iPhone) and we can see the two generations separated by a wide technological gulf that changed society far more than most inventions of the 20th century.

For the last 5-10 years, marketers have tried to pin down the buying habits of the millennial generation and have attributed many different motivations to a whole generation (producing, as a side-effect, an industry of ‘Millennials have killed [insert industry]’ article writing) – they are lazy, disloyal, obsessed with experience and on and on – but while I’d need a grant from a university to prove it, I feel the easiest explanation for Millennial behaviour is this technology gap – a period effect that transcends the various other factors (wealth, education, gender, race and the various inequities that each produce).

While Millennials have no doubt shopped on the high street, for example, the practice has never been their only option for shopping, they have never had the need to develop brand attachments for certain stores (something which reduced the time spent shopping and also helped build a sense of identity in previous generations) – and those brands that have captured Millennial loyalty have tended to be technology brands themselves, portal devices which allow us to access the online presence that we all, to a greater or lesser degree, now build for ourselves.

The idea that internet access will impact brand loyalty is not new, by any means, and was being written about back in 2014 on the website of the Harvard Business School – what I think marketers have underestimated is the generational shift in attitudes that such a major technological shift can introduce in attitudes to brands and brand loyalty. While it will impact all demographics to one extent or another, the impact on the so called digital native has to be greater. 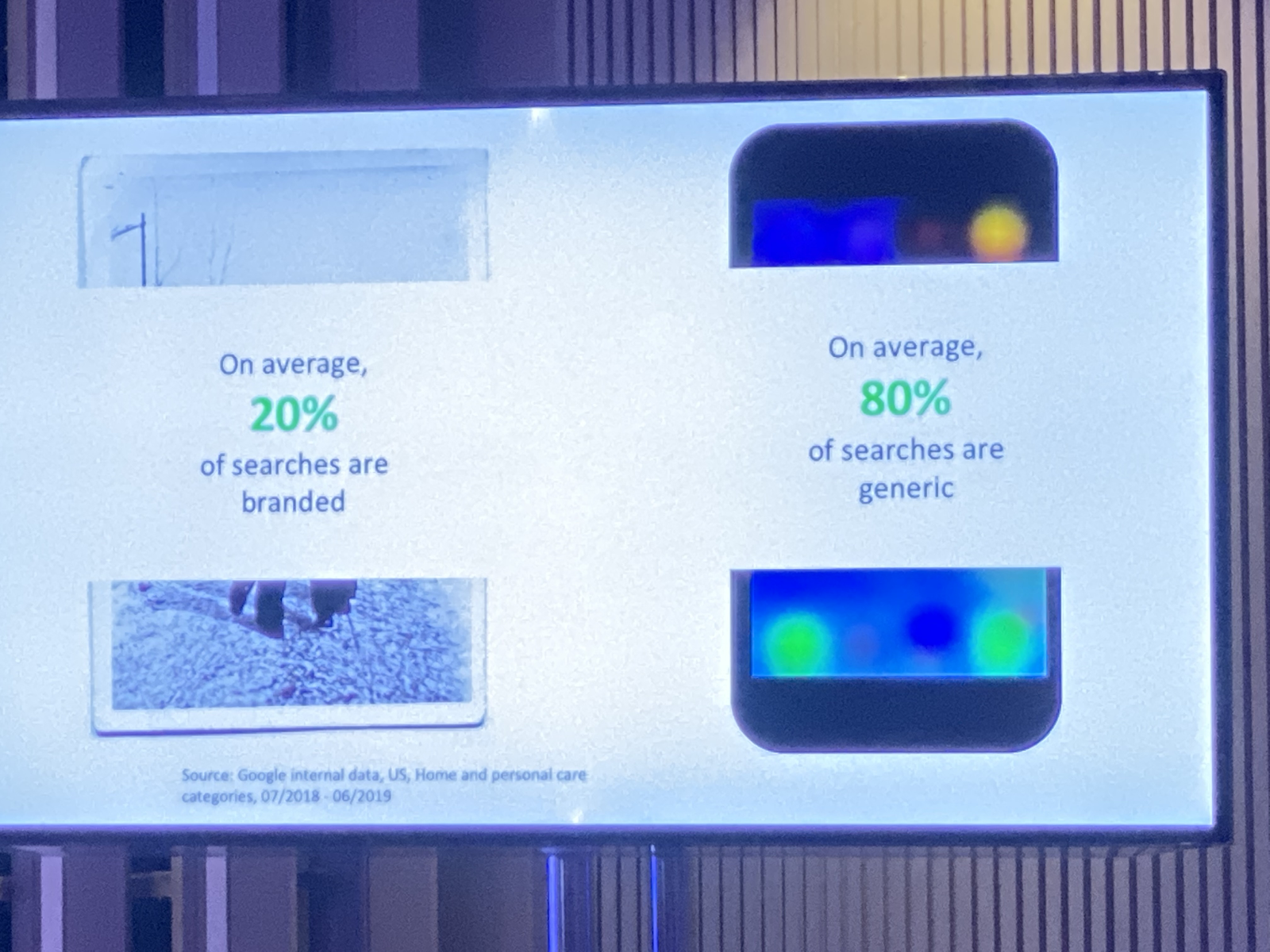 This brings us back, finally, to where we came in – the importance of non-brand SEO. When the whole of the retail landscape is equidistant from your position on the couch, or train, or wherever else, when we can find anything with a shopping search (either on Amazon or via Google – the two main starting points for all shopping searches), having a brand in mind at this ‘awareness’ moment (the realisation of a need) is unnecessary.

As the image above shows, 80% of all searches on Google are generic – and while Amazon sells brands, I can’t remember the last time I searched there for a specific one. While we may have a brand of phone we use, we’re unlikely to feel the same about any more basic regular purchase. Instead of seeking specific brands, the modern consumer – and especially those born in the information age – is far more likely to make purchases based on reviews or recommendations. 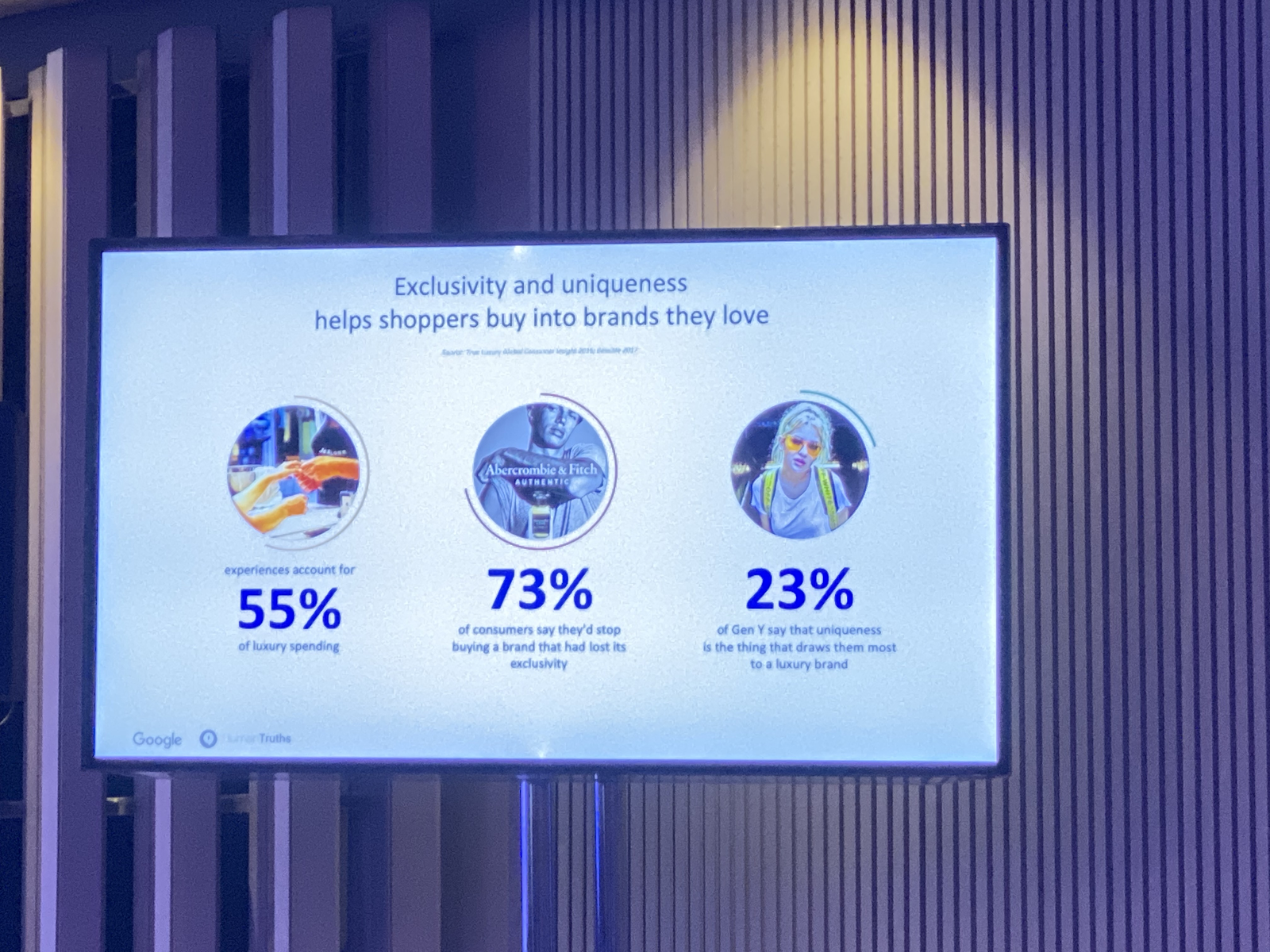 In order for brands to succeed online, we need to be pushing brands to shift their strategy to one which represents the way people search, encouraging them to develop strategies which target non-brand keywords as a priority. While television and radio remain places to build a brand, the internet has become far more egalitarian, with small and large businesses able to compete with less advantage to the larger brand (though there is still some).

Online, we are increasingly competing in a world where brand awareness is a secondary concern – to perks, to value, to experience and to exclusivity – and in this environment, we need to ensure our brands are appearing where the consumers are, and that is in generic, unbranded search results. 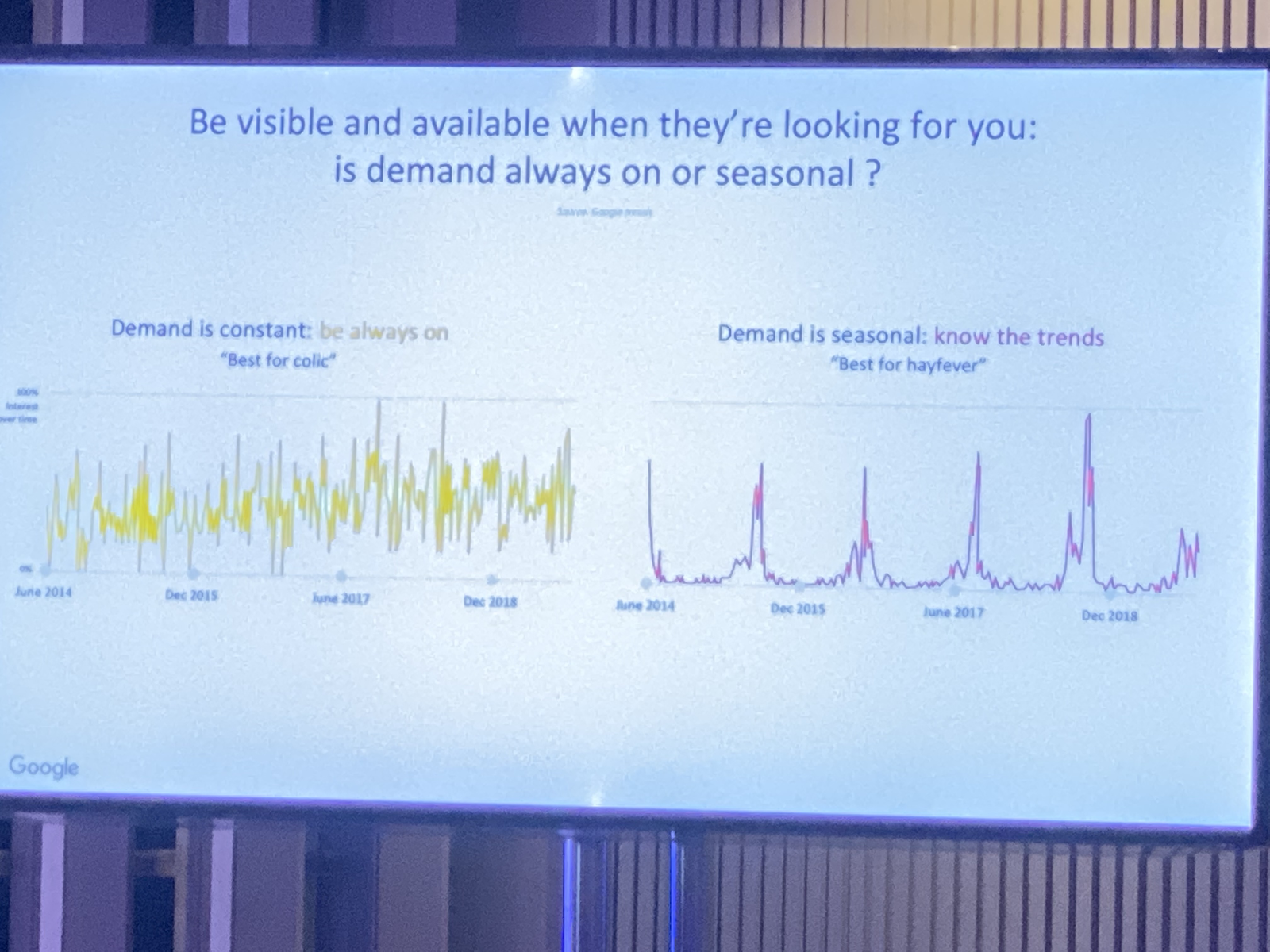 As high street familiars such as Mothercare and Thomas Cook have disappeared, following the death of Toys ‘R’ Us and the seemingly constant firefighting at Currys PC World, it would be easy to predict the death of the ‘brand’ entirely, but this is unlikely to happen. Instead, what we are looking at is the need to build both brand reputation and online visibility.

As consumers have become increasingly comfortable with buying expensive items online (and, it bears repeating, this is consumers across generations), brands need to ensure that they are (as in the above image) ‘visible and available where they [consumers] are looking for you’ as well as reputable enough to encourage purchase. With 80% of searches potentially outside of your crosshairs, there is room for brands to expand their reach and increase their online profitability by catering not to simplistic generalisations about generations, but to the way that a 20 year long digital revolution has changed the way we shop and the way we search.

Take pharmaceuticals, for example – a sector which has historically relied on brand – in a report by Accenture Life Sciences (quoted on The Pharma Letter back in January of 2018) revealed that 70% of respondents (to a survey with an 8000 sample size) ranked outcome above brand, with brand loyalty ranking 12th of 14th influences on their treatment decisions. Jim Cleffi, a managing director in Accenture’s Life Sciences practice, is quoted in the same article saying:

Patients in our study made it clear that outcomes matter most, which means that pharma companies should focus their launch strategies and communications more on patient value and impact versus the brand.

As such, we are also looking at having to direct budget and time at unbranded searches further up the marketing funnel. Again, of course brand is important, but as Cleffi states further in the article: “healthcare remains very personal and will continue to be heavily influenced by the importance that patients attach to trust and relationships […] the digital era affords the opportunity to extend those relationships and deepen patient knowledge on a much more personalized level.”

If we acknowledge that, in many cases, consumers are increasingly unlikely to come directly to a brand at the awareness stage for information, and similarly unlikely to look for you directly at the intent stage, then we have to accept that – online at least – we need to focus more of our time, effort and budget on targeting unbranded queries – not because of a generational shift, there is nothing entirely unique from one generation to the next. Instead, because the internet has changed the way we shop across demographics, we need to change the way we approach marketing.

Click’s expert team have worked with brands across a multitude of industry sectors. If you’re looking to improve your brand’s search visibility get in touch with us today to discuss how we can work together. 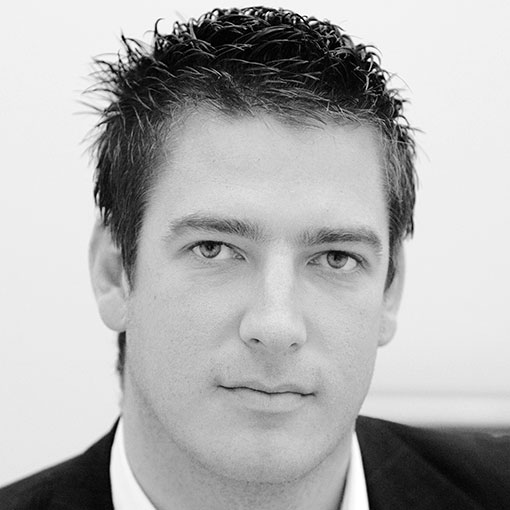 Since Click Consult was born in 2003, Matt has demonstrated his expertise in digital marketing and collected a portfolio of prestigious awards in recognition of his success. Click’s success is driven by Matt’s core principles to operate strategically, with technical expertise and creativity, while valuing people and relationships.
See more from Matt Bullas →

What a few weeks we’ve had. Last night we picked up our third award in as many weeks for our…

While we are often told to create ‘quality content’, the advice on what quality actually is is a little thinner…