“The myriad of options available during Prime Day allows shoppers to explore countless products online. While the vast number of product options is beneficial, it can ultimately lead to roadblocks in consumers’ ability to make a decision, better known as choice overload,” said Claudine Bianchi, chief marketing officer, Zoovu. “As consumer expectations continue to grow and alternatives with better consumer experiences are only a few clicks away, retailers and brands are encouraged to make personal assistance and guidance available at the right moment, just when consumers need it. This means understanding needs and using intelligence to provide personal, digital assistance in real time.”

Amazon is launching Counter, a new package delivery option for customers to pick up shipments from staffed retail locations. The program kicks off in 100 Rite Aid locations in the US. For Amazon sellers, the new pickup option could mean a lucrative boost in sales from customers motivated by the convenience and security of a store location. Amazon said it plans to expand to 1,500 stores by the end of the year.

Google is introducing a new feature to its Maps app that will help commuters hoping to avoid packed trains and buses during rush hour. Crowdedness predictions, which work out how busy trains, buses and Tube journeys are likely to be based on past rides, are coming to 18 cities and towns across the UK.

The option is rolling out on to iOS and Android devices in almost 200 locations across the world, including London, Cardiff and Edinburgh, designed to help travellers make an informed decision about whether or not they wish to squeeze on to a congested service or wait for a quieter one after. 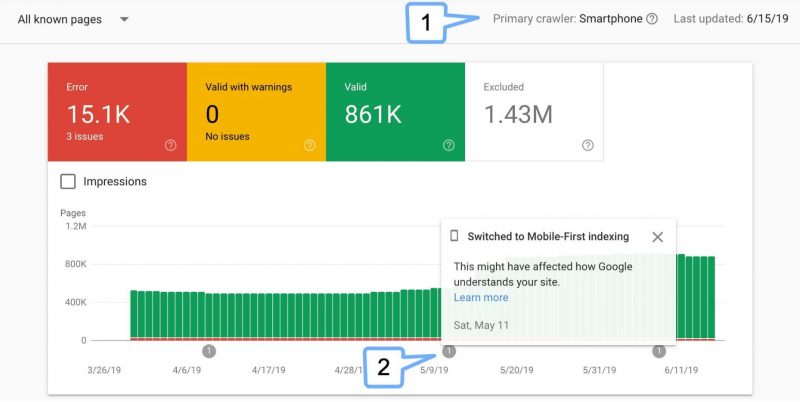 As part of our continued commitment to mobile-first indexing (read more at https://t.co/7FXf67A84f), today we are announcing a few tweaks to Search Console reports that will help you understand how Google is crawling your website

Google is announcing new updates for retailers and emphasising that consumers are “on the lookout for deals year-round”.

Soon, advertisers will be able to use Local campaigns to drive calls to their business locations. Store visits measurement will not be required for this feature to work.

Group locations for local campaign messaging. Advertisers can now set up location groups, or subsets, of their locations to tailor budgets and messaging to specific locations based on in-store promotion and sale schedules. Google says “on sale near me” searches have increased by 250% since 2017.

Promotions in LIAs. Google is bringing promotions to local inventory ads (LIAs), the Shopping ads that feature products available in stores located near the searcher. Promotions can be used to highlight special offers and promotions. This feature is coming first to the US and Australia and will roll out to other markets eventually.

Google has confirmed that social profile markup for Knowledge Panels has been deprecated.

In a tweet, the search engine said: “We now automatically discover profiles to include. Those who have claimed Knowledge Panels can also suggest any profiles not included.”

Google will only display one Featured Snippet per page

Google’s John Mueller stated only one set of structured data will be used in search results when a page contains multiple types. The topic was brought up in a recent Google Webmaster Central hangout when a question was asked about using ‘recipe’ and ‘how-to’ structured data on the same page.

In response, Mueller told the webmaster they could use both types. However, only one type of markup will end up being displayed in search results. The message to SEOs was that using both sets of structured data won’t make you eligible to appear in two different featured snippets.

Researchers found that Google’s Play Store contained thousands of possible malware-ridden counterfeit apps as Google continues to try and up its security measures.

The research, conducted by the University of Sydney and Commonwealth Scientific and Industrial Research Organisation, found that over a million apps on the platform were counterfeit and potentially dangerous to download.

The study stated: “We were able to find 2,040 potential counterfeits that contain malware in a set of 49,608 apps that showed high similarity to one of the top-10,000 popular apps in Google Play Store.

Google has also confirmed a timeline for the rollout of Manifest V3. The first public version, earmarked as a developer preview, will arrive in July or August this year, according to Ghacks. The controversial changes to Google Chrome will cause some ad blockers to break.

A carousel of text ads on mobile is something we’re seeing for the first time Has anyone spotted this before?@rustybrick @sejournal @sengineland @TheSEMPost ❓ pic.twitter.com/fe7BteeOqy

Shopping ads have appeared in a carousel format for some time now. Google will be watching the impact on click volume and click-through rates. A Google spokesman told Search Engine Land: ““We’re always testing new ways to improve our experience for our advertisers and users, but don’t have anything specific to announce right now.”

People are liking and sharing less than they used to on the social network giant, with both actions down by almost 20%, new data has found.

While engagement seems to have dropped off over the last 12 months, the number of Facebook accounts being created continues to rise. According to analytics company, Mixpanel, the drop of 20% can be traced back to April 2018. This was when news broke of the Facebook / Cambridge Analytica scandal, opening the world’s eyes to how non-consensual harvesting of private data could be used to undermine the democratic process.

The Information Commissioners Office has admitted that its current consent notice relating to the use of cookies on devices failed “to meet the required GDPR standard”.

A remarkable admission from @ICOnews – its #cookies consent process has been wrong (‘doesn’t meet the required GDPR standard’) and it’s being urgently changed. [In fact, it’s probably not been to the required standard since 2011.] #gdpr #pecr pic.twitter.com/aIFuO0kR4e

Uncovered by Adam Rose, a lawyer at Mishcon de Reya, a complaint was sent to the ICO regarding the cookies on their website. Rose argued that the cookies was in breach of Article 6 of the Privacy and Electronic Communications Regulations (PECR) 2003 – which sits alongside the EU General Data Protection Regulation (GDPR).

In an email back to Rose, the ICO responded: “I acknowledge that the current cookies consent notice on our website doesn’t meet the required GDPR standard. We are currently in the process of updating this.”

The email went on to state that amendments will be made during this week.

Keep up to date with all things digital and search marketing by signing up to our blog, or check out our resources to take your search strategy to the next level with our industry leading insights.

We quizzed our Senior Digital Designer Andy Rothwell about the ideal client brief, how he creates compelling experiences, and optimising…

Recently, one of the best and most thorough pieces of information I’ve seen – relating to mobile optimisation – landed…

LinkedIn is fast becoming the darling of social media advertisers, with 42% of media buyers planning to increase their ad…

Like many agencies, we’re still shifting the way we report to clients as Data Studio adds further features, we’re able…

Google My Business is an underused free platform for brands of all sizes – use it and use it right with our helpful guide.