We were able to, from past experience, predict that an update to Google’s Quality Rater Guide in October was likely to indicate an update, but now that we have an approximate timeline, what else can we infer about the November 2021 Core Algorithm Update?

In our piece on the QRG update, we examined the changes that had been made and what those changes may have been in response to. These could all be broadly included in what would be known within the search and digital marketing space as ‘EAT signals’ (expertise, authority, trust) which were primarily introduced a few years ago (last year? 2 years ago? what is time) to help Google differentiate between sites in the YMYL industries (your money or your life – so banking and medicine, for example).

Since this first introduction, EAT has proven to be fairly successful – there has been a lot of ink spilled on the subject, but the overall impact on brands can be fairly summed up by the below slide from a presentation at Brighton SEO by the ever interesting Lily Ray which shows some of the 2018 (it was 3 years ago) updates: 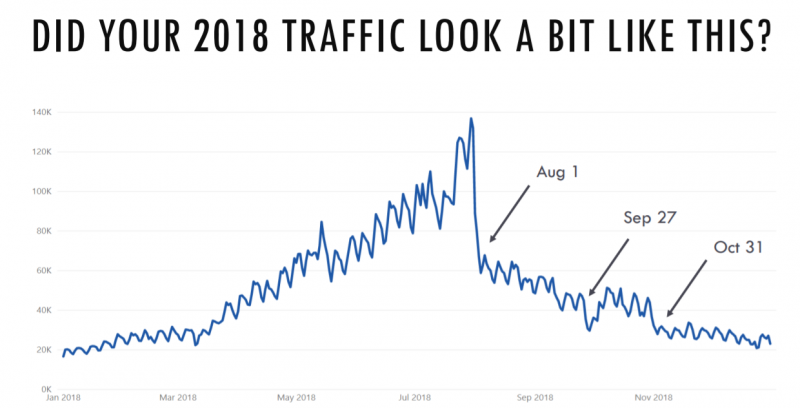 With disinformation and misinformation appearing over and over as arguments with so-called ‘big-tech’, it would be reasonable to assume that the broadening of the situations where EAT signals would be important. This seems to have been the case since 2018 and the recent link spam update is a further indication of how seriously Google is taking the measurement of EAT.

What the announcement said

Typically for any update these days, the N21CU has been given no real context barring the standard ‘read our previous guidance’ advice. However, the update rolled out on the 17th and will run, according to the announcement, for a couple of weeks. 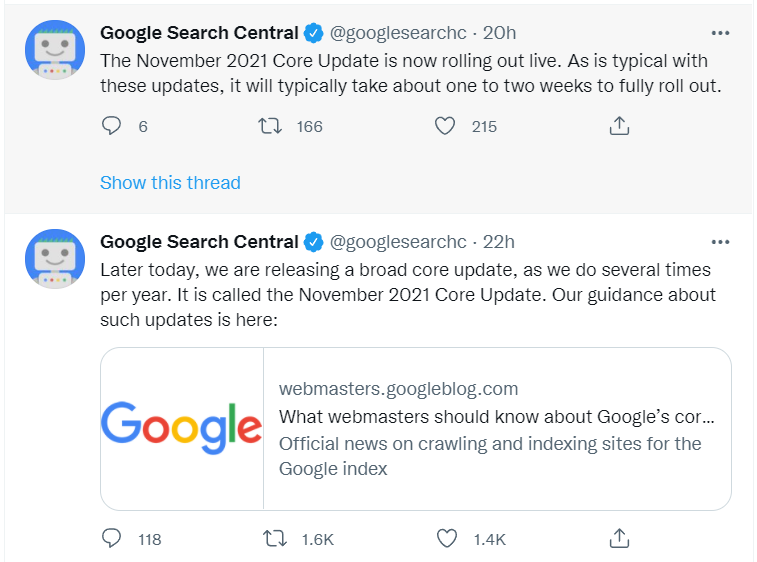 This means that, for the next two weeks or so, we’ll be expecting some fluctuation in rankings before the full effect can be surmised at around the three-week mark. As things stand – one day in – we’re seeing most algorithm trackers (from Mozcast to AccuRanker and most in between) are hovering around the same level as some recent minor updates (including the recent link spam update).

What we know and what we can infer

There has been plenty of volatility in the above ranking trackers consistently throughout 2021, which would seem to indicate that the year has been one of tests for Google. In addition, as we covered in the article, we wrote on the QRG update, the addition of the BERT, MUM and LaMDA language models to the Google algorithm likely explain this fluctuation in part.

Google is getting better at understanding the content on the web and, combined with the language model advances that featured heavily in Sundar Pichai’s Google I/O keynote, the link spam update and the changes in the language around EAT signals in the QRG, it would be reasonable to assume that the update in progress will be directed at better understanding these ‘quality’ indicators algorithmically.

While we won’t know for sure for a few weeks, we’d be reasonably confident in saying that sites impacted over the coming weeks will likely need to closely examine the EAT signals and quality signals that their site is communicating. You’ll need to conduct a thorough content audit and check for poor and thin quality content as well as examine the expertise that is on show – are you building expert entities, for example; more broadly, are you paying attention to the knowledge graph, what signals are you sending about the products or services on offer and how are you connecting them to the wider industry knowledge graph or ontology.

Should you be worried?

Again, as we said in the blog that covered the QRG update, we are unlikely to see huge fluctuations from such an update these days – major updates tend to the way the algorithm works tend to be announced in advance, for a start – these core updates seem to be the culmination of a period of testing – so, really, you should only be worried if you’ve been seeing large fluctuations across your rankings over the last six months or so, or know you have extant content issues.

Want to make sure your brand stays ahead of the game? Why not contact us today to see what our team of search and digital marketing experts can do for your brand?