Lukasz, an SEO Consultant who previously worked at uSwitch.com, began by apologising if his talk  – was rushed, only he had 77 slides to fit into 20 minutes. So let’s begin…

Lukasz explained that he identifies the keywords that are already ranking and their URLs so he can push them up even higher.

Give Data Studio access to Google Search Console. Lukasz said that he never now uses Search Console natively, but always through Data Studio because it gives him a much deeper view and access to more data. the maximum number of rows you can export from Search Console is 999, which could be only a fraction of the keywords driving traffic DS up to 20K.

He creates a simple snapshot table including queries, landing pages corresponding with those queries as well as three metrics: impressions, clicks and CTR.

Lukasz explained that he then sorts the data twice: first by landing page, then by either impressions of clicks (impressions is better if there is only a small amount of traffic). This allows him to group keywords and corresponding URLs. He then looked at the five best performing keywords per URL so that he can begin optimising those landing pages, creating a pivot table (which he admits he loves “with a passion”). 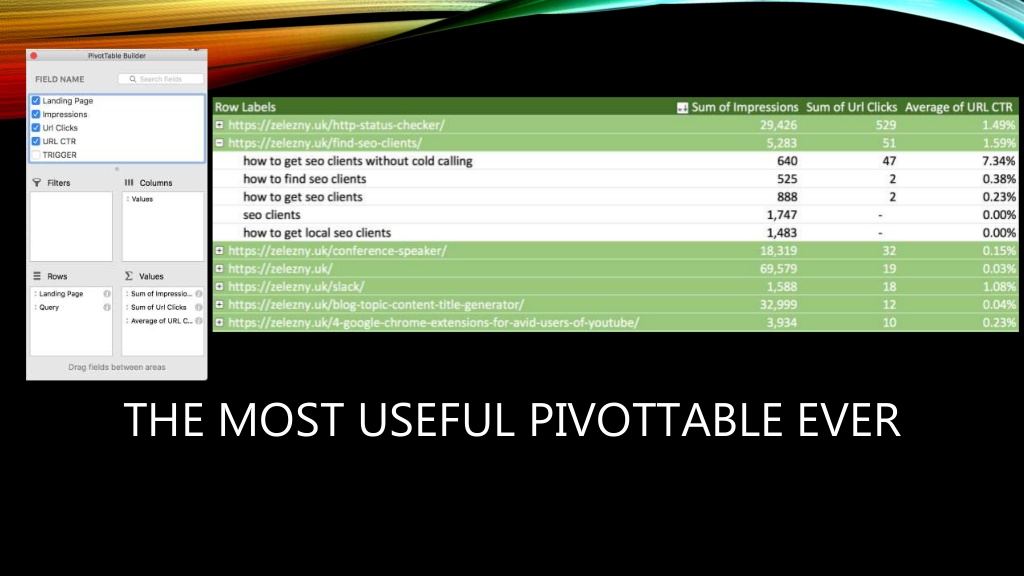 He stresses that this is s strategy for established websites and for which you are able to identify and leverage quality traffic.

He starts by looking at keywords by intent using a traditional marketing funnel, but instead advocates Simon Sinek‘s ‘golden circle’ approach – “start with the why”. Sinek applied this philosophy to business start-up planning. But, in terms of SEO, Lukasz translated Sinek’s circle into the ‘SEO search volume golden circle’ (see below). He explained that it allows you to step into the shoes of your customer, with the sizes within it representing the potential volume of search demand. 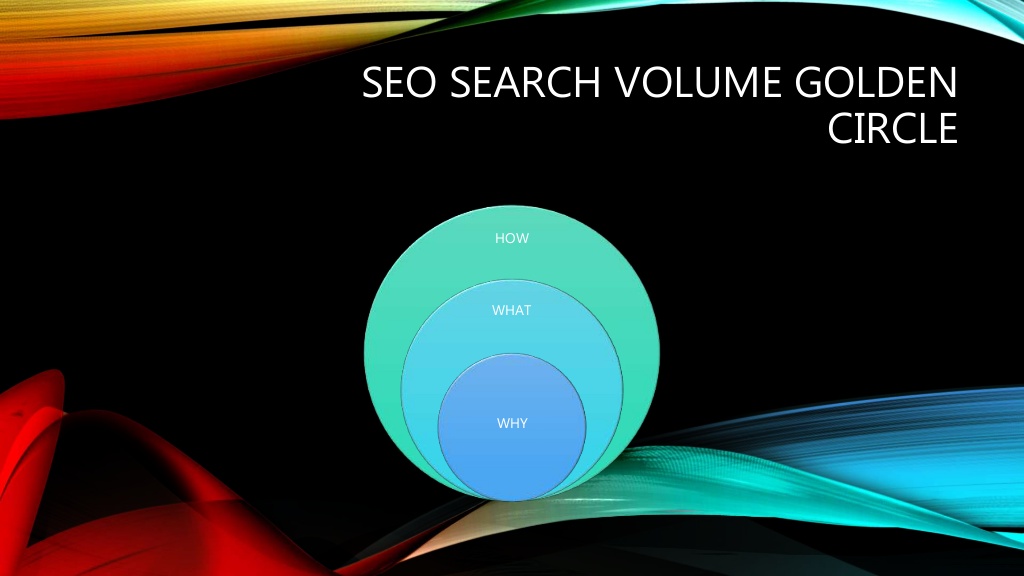 ‘How’ is the sweet spot for every successful strategy he has worked on, Lukasz says, and rarely using ‘why’. He illustrated this point using two websites he considered to have “absolutely phenomenal content marketing”: HubSpot and Shopify. After analysing a million keywords for each site using SEMrush, he found that more than 10% of them contained the word ‘how’. He explained that it was no coincidence they were targeting these keywords: they get a high CTR because when people type a ‘how’ question, it is unlikely they’ll get a satisfying answer through the SERPs without clicking for more information. (He also noted that it was the same case when he did keyword research in his native Polish).

He then goes in to SEMrush’s Keyword Magic Tool and enters the keyword “organise conference”, and the tool intelligently splits keywords between questions and non-questions. 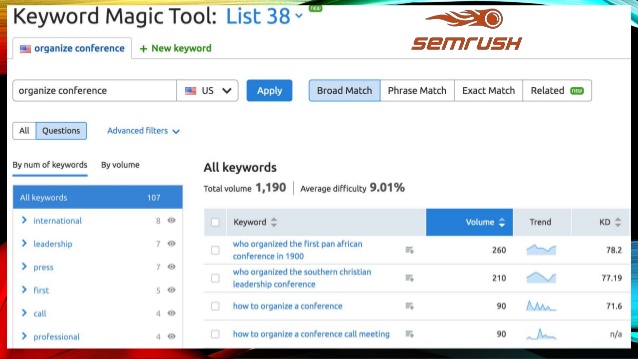 Doing another search with the keyword ‘London’ to identify queries that contain that word and words that indicate that these are questions he found that, somewhat bizarrely, the top result was “how to cook broccoli”. However, he pointed out that this is a useful way to look for words that have both search volume and low difficulty that would be useful for someone who wanted to start a new site that would generate plenty of traffic.

Calling on his background in working with price comparison websites (such as uSwitch), he said he would advise someone who wanted to start one from scratch – which would be highly difficult to break into in the UK – to use the Keyword Magic Tool to uncover queries that could be easier to compete with than more generic searches “balance transfer credit cards” or “best credit cards”. He came up with the following that you could target to potentially rank well: 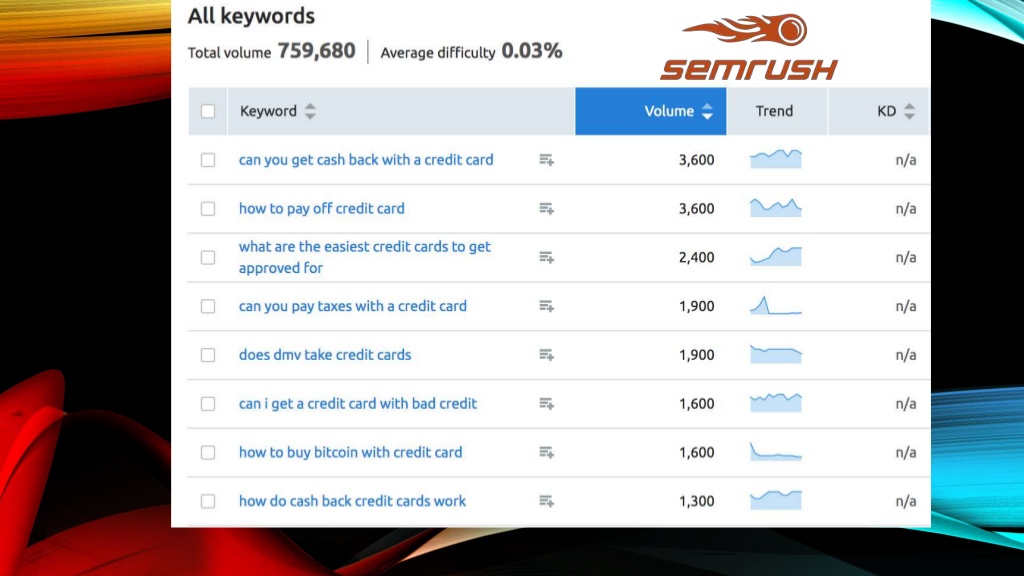 Conceding he was lucky, SEO-wise, with his (even in Poland) unusually-spelled surname (‘Lukasz Zelezny’), and that this would work to his advantage when monitoring mentions of himself in a brand tracker, such as: TalkWalker, Brand24, Fresh Web Explorer and Google Alerts.

Using Brand24, he set up his name in different variations, and the tool began aggregating tweets, Facebook posts, blog, news etc. In one month, he found he had 52 mentions with a reach of more than 73,000. Then he wondered what he could do with the information he gathered –  and realised it would be a great link-build opportunity. He simply contacted the people who had mentioned him, thanked them for doing so, and simply asked them for a link – a technique which he said he found extremely effective.

Often, online mentions link back to an individual’s or a company’s social profile, rather than their website – and Lukasz found this was the case with people linking back to his LinkedIn. His solution was to try to redirect these links from his profile to his website.

Searching Majestic, he saw there were 32,958 and 219 referring domains pointing to his LinkedIn profile. He dug into this further. Like in the previous point, he contacted the people who had linked here, and asked them to change it to a website link. He then repeated this successfully with Facebook and Twitter. 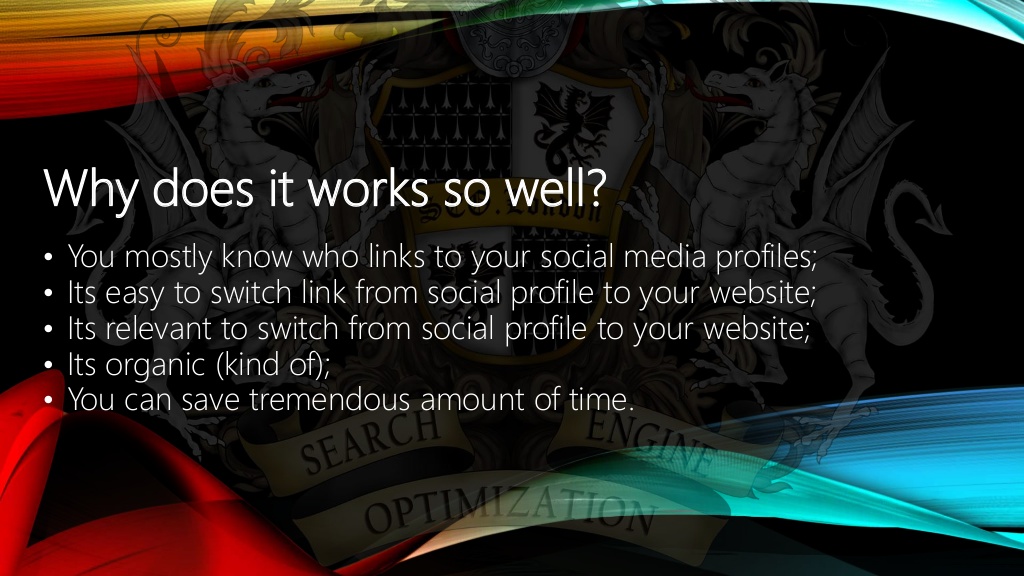 This section was about merging subdomains into subfolders. He described how a client told him he had a blog on a subdomain and that he advised him to move it into a subdomain, to allow Google to stop treating the blog as a separate the domain and allow the main website to benefit from the blog’s link profile. Here was the effect on the client’s visibility: 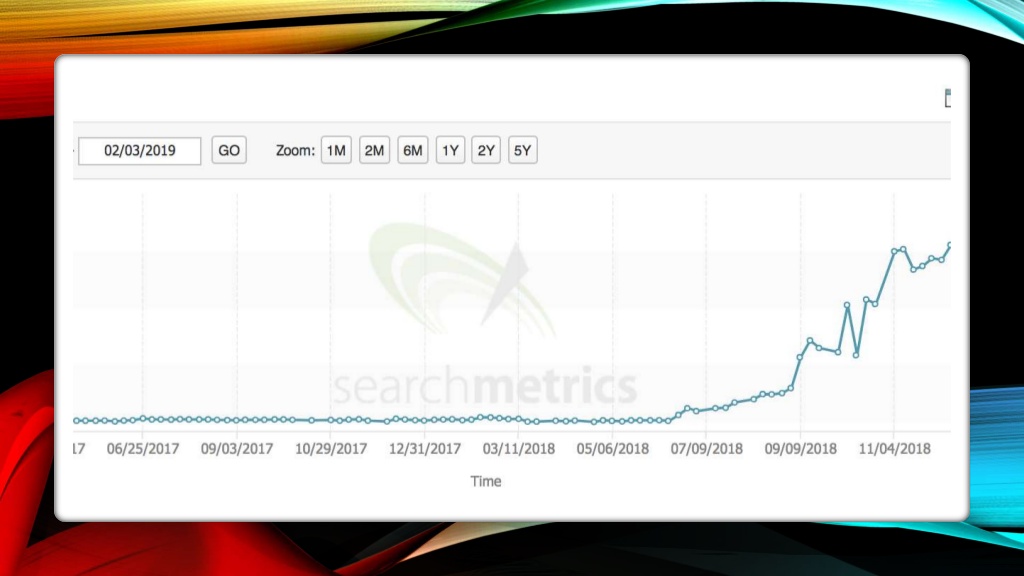 Lukasz recommended that sites with a blog, or FAQs, or anything similar on a subdomain should follow this process as a simple way to boost visibility.

Watch Lukasz in action with his funky red fedora and cravat, or view his slides, here they are:

SEO Manager for Consensys and Edinburgh Festival stand-up, Olsina took to the Benchmark stage in 2019 for her second appearance….