This blog will also be the first full episode of the new on.click podcast and, while it covers some ground we’ve been over before, it’s with the benefit of more water under the bridge and lessons learned

Digital assistants have been permeating western culture now for some time, with episodes of various sitcoms featuring storylines driven by Siri or the Google Assistant or Alexa, there are sites devoted to their mishaps and endless articles on the pros and cons of interaction with them (including one from the Guardian today which covers all the bases from their limited usefulness to the part they will play in the coming artificial intelligence (AI) led annihilation of humankind).

Within the search marketing industry, there are a number of ‘future of search’ articles which are driven by voice search (I know, I’ve written a few), but they tend to be fairly woolly, predictive and lacking in real detail. The reason is that, despite the fact that voice search has been on the horizon and a predicted game changer for some time; it has nevertheless caught a lot of people by surprise – with almost 42% of respondents to a survey (sent to a 300,000 strong segment of Click Consult’s email database) reporting that digital assistants represented the biggest potential game changer for search in 2018. 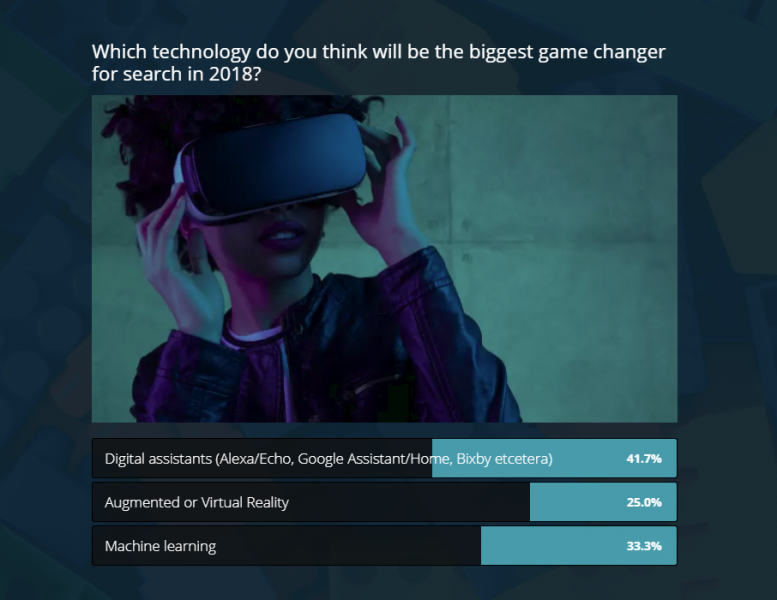 The reason for this is that the technology, usefulness and uptake has progressed far faster than the majority of marketers and techies alike would have expected. It took mobile (depending on where you draw the line of true mobile search) around twenty years to achieve parity with desktop for searches made, while voice has achieved 20% of all searches since early versions of Siri (the earliest you can reasonably place the inception of voice search) in 7 years.

With rates of voice search among Millennials (roughly those born between 1982 and 2004) and Generation-Z (born 2004 onward) already being estimated in the high 40%s, it is easy to understand why ComScore is predicting that 50% of all searches will be by voice – therefore performing a similar feat to mobile in half the time. While I still cringe, say please and thank you during voice searches (occasionally unthinkingly apologising if the software can’t understand me), my children have been asking Google questions since they could talk.

This potential halving of the time it will take to reach parity also halves the time that brands, from small businesses right up to Google itself, will have to respond to the change. As voice is predominately built upon the advances of mobile technology, it is also capable of accelerating far quicker.

WAP, for example, debuted in 1999 – and it took me what felt like a full 90 minutes to check the football scores – and it took until 2007 and the introduction of some larger, touch screen devices to begin making real progress. Even so, it took another 8 years for Google to introduce its first major mobile friendly update to the core algorithm (called Mobilegeddon at the time).

We are now entering a period where Google is beginning to roll out ‘Mobile First Indexing’ – almost two years after mobile searches exceeded those on desktops. It is difficult to imagine that the search marketing industry has until 2030 to fully optimise for voice search (according to Google Trends, to illustrate interest, users in the UK in 2017 – an election year in the middle of Brexit – searched for Alexa far more often than Theresa May). 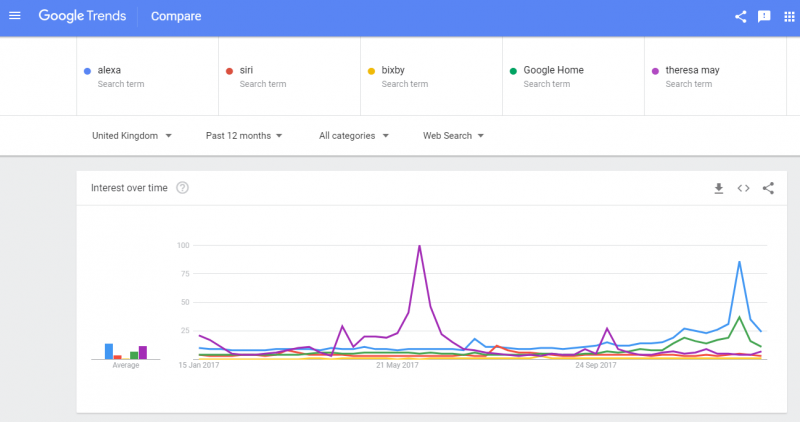 This is where, I believe, from where the slight schism in opinion comes regarding voice search. It is as easy to find articles dismissing voice search as a potential force as it is to find overestimations of its imminence.

I’m going to – in a cowardly fashion – fall somewhere between the two: I believe that voice will begin to impact search this year (especially with the introduction of screened voice devices like the Amazon Echo Show), whether through small drops in site traffic, but equally I think the true impact of voice search is a couple of years off and bound with the improvement of conversational or interrogative search (by which I mean voice searches with the option to further refine a search through interaction with the digital assistant rather than each search being held as separate), wearable tech and augmented reality (AR).

The reason for this is simply that voice search has found the web unprepared. While people are showing a surprising (to me) willingness to use voice search, its facility is little more than that of searching via text input and will often (though less often than it has in the past) necessitate a visit to a webpage anyway.

The increase in rich results, however, show that Google is keen to deliver answers directly from search engine results pages (SERPs) and this trend is likely to increase as voice search progresses – for example, of a group of 339 keywords tracked by Click Consult through Ahrefs’ rank tracking tool since the end of September, there has been an 85% increase in rich results showing in associated SERPs, including a major bump from the introduction of ‘people also asked’ rich results (a variety that could potentially deliver a lot of data that Google could feed in to future interrogative search capability).

October’s major increase is predominately down to ‘People also asked’

However, while voice search may trigger more answers directly from search in the future, it is highly unlikely that Google will enter in to a mass project of content production. Instead, these answers will tend to come from curation of first page sites – as the rich results do now.

This, combined with a (currently struggling) push to force Google to pay compensation to publishers, could lead to profit sharing opportunities for publishers capable of featuring regularly in rich results and voice results.

This is where the issue lies with voice search at the moment: no one has really worked out how to successfully monetise it. While Amazon is making money on the physical assistant devices, and potentially from orders through it, there is nothing definitive to say that they are earning more from Echo or Alexa (beyond the cost of the device) than they otherwise would from text interaction. Both Google and Amazon have been furiously denying questions regarding possible advertisements on their devices (though one has tried, unsuccessfully, with a promotion for Beauty and the Beast – which it denied was an advert at all, while the other has recently begun opening up to more ‘paid promotion’).

Where I believe the benefit for publishers will come, however, will be that voice search will eventually make our personal choice of digital assistant a staple part of our lives in the same way that mobile phones have become. People will come to trust them – especially as they increase in their ability to personalise responses and improve in their usefulness in day to day life.

When this personalisation is combined with localised search (another area that has seen a lot of tinkering from Google in the last year), we could then see our friendly digital assistant begin to make suggestions pulled from recent searches, from diarised anniversaries and birthdays as well as from paying publishers. “Where’s the nearest pizza place?” could lead to paid promotion, as well as top results, and personal favourites from past purchases with an Android or Apple Wallet.

It is reasonable to infer from the activities, business purchases, tweaks to search and various other things from the big five in tech where they see the future – and it is mobile, personalised, local and spoken. So what can we do to prepare if not even the companies driving toward the future appear to have settled on how to get there?

There are three ways to prepare which I have gone in to in a little more depth in a previous article on the Click Consult blog and elsewhere:

While 2018 will most likely not be the year of voice search – however long it takes, voice is coming – and it is better to prepare in advance than face being caught out by a sudden shift. 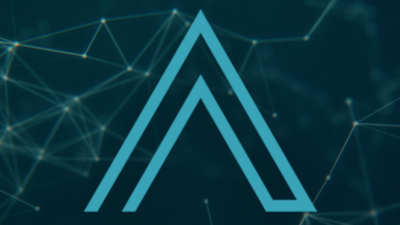 You can subscribe to Click Consult’s podcast in the player above, or here for Apple users, can find more actionable insights in our resource section (including a recent mobile boxset) – or contact us to see what we can do for your brand.

2018 is a time for change. As we’re sure you’ve heard, many businesses are scrambling for market share and by…

YouTube’s Recommendations drive more than 70% of what we watch, keeping mobile users watching for more than an hour at…

Attribution has been big news over the last 12 months, with paid search experts (including our own Dave Karellen) talking…

We have our annual predictions infographic live on the site now, but I wanted to go through the forecasts of…

Ceri explains why no two days at Click are the same, how she finds her boss’ humour ‘challenging’ and confesses…

It’s here at last (mostly), and Google have offered a helping hand for those who want to know if the…

Mobile optimisation is going to preoccupy a large number of brands this year as they prepare for the final move to Mobile First – here’s what you need for your move to mobile.

Take your conversion insights beyond the flawed ‘last click’ attribution model, and find out which ads have the greatest impact

As the New Year dawns, here’s some inspiration to make you marketing budgets work harder and capture the attention of those looking to make the most of the January sales

The smarter you are with your content and campaigns, the better the results – the secrets behind a killer content marketing strategy

By following these 5 simple steps, you can reinvigorate, reenergise and revolutionise your paid search performance.

By following these 5 simple steps, you can reinvigorate, reenergise and revolutionise your paid search performance.

Help clients to find, connect with, and remember your B2B brand with a integrated SEO, PPC, content and social strategy